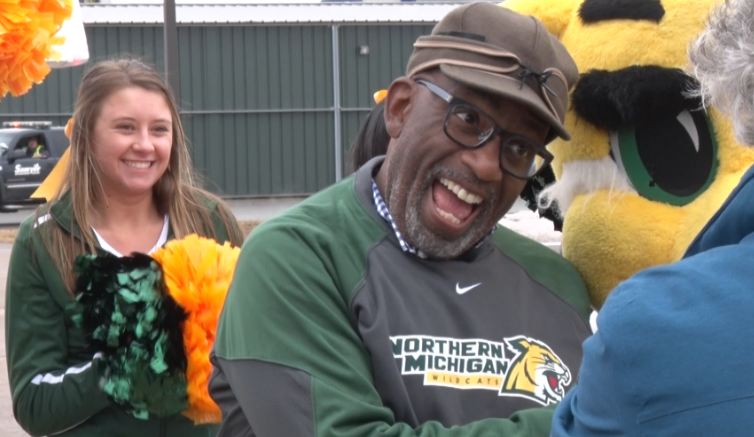 MARQUETTE — Al Roker has officially landed in our neck of the woods.

As the plane landed, the band played with excitement and anticipation for NBC’s Today Show’s Al Roker. Al Roker’s decision to visit Northern Michigan University came after his announcement of Rokerthon three. This is Roker’s first trip ever to the Upper Peninsula and students from Northern Michigan University knew how to get him pumped as soon as he stepped foot off the plane.

“A lot of schools spirit and a school that is ready to break a Guinness World record. I know I will be there tomorrow morning, as long as I have Willie the Wildcat with me, I’m all right,” said NBC’s Today Show, Al Roker.

In this third installment, Roker is traveling to different college campuses across the nation in an attempt to break several World records. NMU already has a history of breaking world records, adding just another check off the list.

Roker noted that NMU’s colors are the same as his alma mater.

Having not only Al Roker but national coverage of Marquette, gives Northern Michigan University the chance to shine in the spotlight.

“This is national exposure that you just can’t buy and it was exciting that we were selected. We’re going to really show off who we are,” said Northern Michigan University Spokesperson, Derek Hall.

The excitement will begin Tuesday morning at 5 A.M., where one thousand students will partake in the World’s largest game of freeze tag at the Superior Dome. Community members are invited to come to the Dome in an attempt to break another World Record.

NMU students make clothes and blankets for the Women’s Center

One act plays performed at NMU