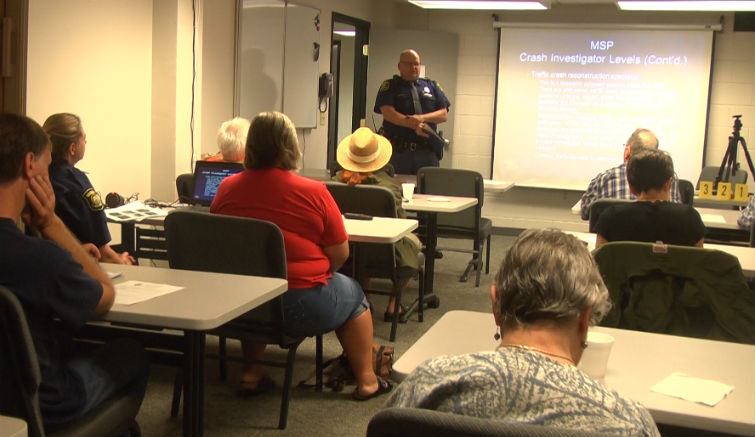 NEGAUNEE — Accident reconstruction and traffic investigations were the topic of choice for Wednesday’s session of Citizen’s Academy.

“There are so many things we do throughout the day that we’re not out to target people,” said Michigan State Police Trooper Stacey Rasanen. “We have many different jobs so when we do make a traffic stop, it’s because somebody is doing something they should not be doing. Also, more than likely they probably will get a verbal warning more than a ticket, but people remember the ticket.”

Coming out of a busy Fourth of July weekend, participants in the Michigan State Police Citizen’s Academy had a slew of questions for troopers today as discussions of accident investigations and traffic enforcement techniques ensued. Within the MSP, there are four levels of specialization when it comes to traffic investigations and scene reconstructions.

An average run-of-the-mill traffic accident won’t call for a full investigation, but when a severe injury or fatality results from the crash, the specialists are called in to determine the details. Important questions regarding legal responsibility in several situations, such as distracted driving and driving while under the influence, came up during this section.

“Just so they’re aware of the severity or the possibility severity of what they’re doing before they’re even thinking about doing it,” Trooper Rasanen said. “Before you go up behind the wheel and you’ve had a few drinks – what you can cause, the damage to yourself and somebody else.”

Various advanced tools assist troopers at the scene as do search warrants, which are used to determine what the driver was doing leading up to the accidents. Activities like cell phone usage and daydreaming are a concern, especially so for school-aged teenagers with a graduated level 1 or 2 license that are texting while driving. In these instances, Kelsey’s Law comes into action.

“If you are operating a cell phone, you shouldn’t be. You will be stopped for doing that,” said Trooper Rasanen. We want to make sure that students are using good judgment and not being distracted while they’re driving down the road by using their cell phones.”

In addition to the types of driving that may get you pulled over, roadway conditions and dangerous areas where accidents are common were discussed as well. Next week, an Alger County Judge will be leading the class about the legal system and what happens after an arrest.

Suspect arrested after attempting to force woman in vehicle