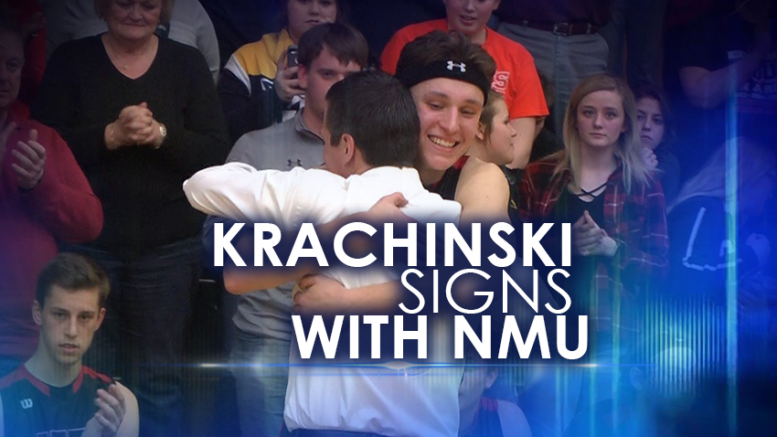 POWERS — The Northern Michigan men’s basketball team is continuing to add talent to their 2017 recruiting class and their latest signing features a bonafide winner.

North Central’s Marcus Krachinski signed his National Letter of Intent to play at Northern Michigan University. Kranchinski said he really enjoyed his visit to the campus because location was one of the biggest reasons he decided to play at NMU.

“Marquette is probably one of the biggest cities in the U.P., if not the biggest. The scenery there was just amazing. The campus is just the perfect size. There’s not too many kids there and there’s not too little kids there. It’s still going to be a good college experience for me. It’s only about an hour and a half from home so if I need to come home for the weekend, I can come home,” Krachinski said.

Krachinski is one of the better all–around players in the entire U.P. and will look make an immediate impact on the Wildcats basketball team.

“He has good athleticism. He has a really good understanding of the game. If you combine all those things together, he’s just a well-rounded player. I don’t think there’s one thing that sticks out like wow he’s a really good shooter, but yet he’s a lax player as far as being able to pass and handle the ball,” Wildcats head coach Bill Sall said.

“Overall, I do need to get bigger, faster and stronger. I just turned 18 this past February, so I’m a little behind just in age. Just maturing from a physical standpoint, I feel like that will help my game,” said Krachinski.

Krachinski and Iron Mountain’s Carson Wonders are the two lone U.P. natives in this year’s class. And more will come if the U.P.’s high school basketball renaissance continues.

“I think this year was a really good year of talent in the U.P. I think there was a lot of college-worthy players. We’re hoping to see that continue as we continue through the recruiting cycles. It was good to be able to get two of those guys that I think are marquee players on our roster,” Sall said.

Krachinski says he will major in Finance and Risk Management at Northern Michigan.