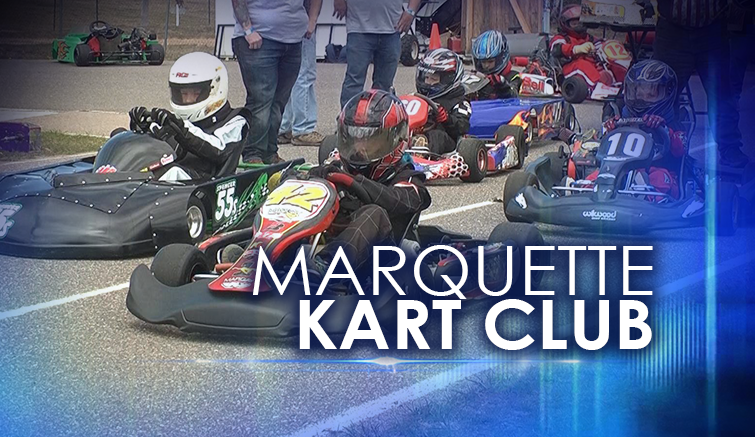 GWINN — The roar of the engines could be heard off M-553 this past Saturday as the Marquette Kart Club welcomed the new season. And this quarter–mile road course has deep roots in the U.P.

“The Kart Club started here in 1996. John Pritchett and a couple of other guys got together. They were racing in Escanaba and they wanted to try and put a track here in Marquette. They had cooperation from the Sands Township zoning board and the Marquette County Fairgrounds, and they allowed them to build a track here,” Club President Carl Miller said.
The club features several different classes from Cadets to Adults, but the club is more popular with the younger drivers.

“Pretty much my grandfather, he started racing. I watched him and I though it was pretty cool, so I just wanted to start,” Michael Miller said.

And when you ask the racers what their favorite part of racing is, the answer shouldn’t surprise you.

“I like passing people and I also like being in the front,” rookie racer Bode Johnson said.

“I think it’s the thrill of trying to get out there and have some speed. And once they get hooked with the friendship out here, because everybody out here acts like we’re all family, the kids just get hooked into it,” said race announcer David Oglesby.

Parents are required to be heavily involved with their kids, not only to ensure their safety on the track…but it creates a special bonding experience that other sports don’t have.

“And you see it after two or three years of being here how the parents and the child can actually talk to each other, instead of going “I don’t know. I don’t know.” They actually start to talk. It’s fun to watch. It’s great to watch when a kid, the light comes on and he figures out what he’s doing and his parents are getting more and more excited about the child because it’s developing,” Miller said.

The races will be going on every Saturday throughout the summer. For more information about how you can get involved, head to their website at mqtkartclub.com.

Great Lakes Rodeo gallops in for a tenth year

Get into the Halloween spirit with the 9th Haunted Hayride

Prepare for a hayride scare