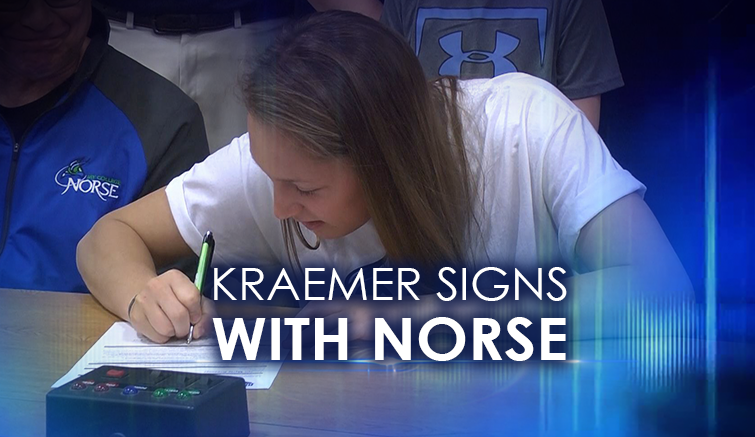 NORWAY — For the past few weeks, several U.P. basketball players have been deciding where they want to play their college ball. Norway’s Jordan Kraemer had many options, but she decided to stay closer to home.

Kraemer signed her National Letter of Intent to play for the Bay College Norse. Her list of accolades includes all time leading girls scorer for the Knights, three–time Mid–Pen Conference Player of the Year and the 2016–17 UPSSA Class ABC Player of the Year. And now she’s taking her talents to Escanaba.

“I’m extremely excited. A little nervous, but it’s a new program. Coach Drake has done a good job recruiting a lot of really good talent from the U.P. so far. I’m really looking forward to what’s coming up next,” Kraemer said.

“The competitiveness in Jordan…it’s very difficult for a coach to instill that competitiveness. You can cultivate it. You can create that atmosphere. But someone with that competitive drive lifts teammates. I would say lifting her teammates to a higher level would be something that I really admired in her as a player in high school for sure,” Norse head coach Rae Drake Jr. said.

“I’m very honored. I’ve worked very hard, and I’ve been lucky enough to have amazing coaches and teammates that have helped me get to this point. I have to thank all of them and the community that stood behind me and really thank everyone that has supported me throughout the whole process,” said Kraemer.