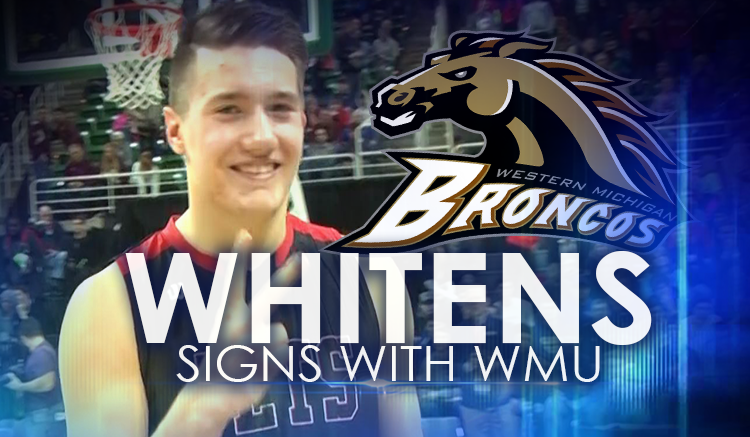 POWERS — In four years at North Central, Jason Whitens has won three straight Class D championships with a record of 108–1, which is a state record for wins and games played. He’s part of a Jets team that has won 83 straight games, the most in the entire country. He also came in third in the Mr. Basketball voting. The list of accolades goes on and on. And today, Whitens added one more: a Division 1 basketball scholarship.

Whitens signed his National Letter of Intent today to play for Western Michigan University next season. He visited the Broncos campus on Monday and it was then that they offered him a full–ride scholarship. It is the culmination to one of the most illustrious careers in U.P. high school basketball history.

“I was getting ready for school and I actually missed the call at first because I didn’t have my phone by me. So I’m walking out of my house and I’m like, “Hey Coach. What’s up?” And the first thing out of his mouth was “Jason, we’d like to offer you the scholarship.” And I was kind of blown away because I was just down there. It was a blessing for sure. That ride to school, talking with him, it brought tears to my eyes to be honest. And then getting to tell my family throughout the day and I went to surprise Coach [Mercier] at school. There were a lot of tears that day, but they were tears of joy and I’m very blessed,” Whitens said.

“It’s been a long time coming. It’s a lot of hard work and dedication. It’s been a crazy offseason for Jason so it’s quite rewarding for him to get the scholarship that I think he deserves. Western Michigan has got a great student–athlete that’s going to be coming there on campus in June. We’re just so proud of him as a community, as a team and as a coach,” head coach Adam Mercier said.

“We always talked about once when you walk on that campus, you got to feel like you belong there and that it feels like home to you. When I went to Western and I visited and met the coaches, it just fit everything that I believe in. It just felt like I belonged and I’m excited to start the next phase of my life there,” said Whitens.

Whitens finishes with 2,062 points, placing him fifth on the U.P.’s all time scoring list.