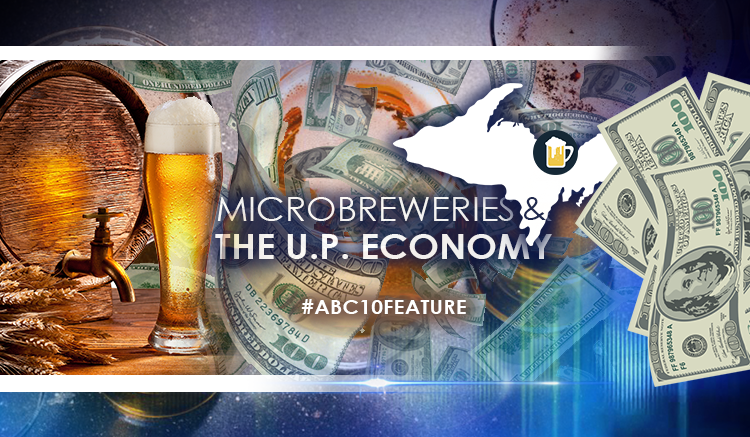 MARQUETTE — Local businesses have been brewing and sprouting in one U.P. city. In this week’s #ABC10Feature, Melanie Palmer sat down with some local breweries and got the details about how they are helping out the local economy.

“I mean in the last 20 years in Marquette, just in town, we have three microbreweries,” said Marquette Chamber of Commerce Executive Director, Jason Schneider.
Breweries are growing fast and taking communities by storm.

“Its been a tremendous growth, not only is it good for the economy because of the jobs it creates and the revenue it brings in from all over the state and Midwest, where our microbreweries sell our beer but it also creates a much richer community,” said Schneider.

So why is Marquette a prime location for these hubs?

“The quality of life in Marquette, we hold that recreational aspect, we hold that ability to get involved with your local community and really create some positive change, it’s much harder to do that in a big city,” said Schneider.

The Vierling, also known as the original microbrewery in the city and one of the first in the state, has watched the growth in popularity for local brews.

“Fortunately we were one of the first to do a brew pub in the state of Michigan. In the beginning, it was a little bit slow, people didn’t really take to the beer styles, but in the last 10 years, it has really taken off,” said The Vierling Owner, Terry Doyle.

In regards to the visitors that are being pulled into these establishments, they come from all walks of life.

“I think that is one thing I love about Ore Dock, we see everyone from babies with their parents to people who remember when this used to be Frei Chevrolet back in the 1940’s. We see such a variety of ages, people coming here for completely different ages,” said Ore Dock Owner/Co–Owner, Andrea Pernsteiner.

“We kind of joke and say it is anyone from 21 to 91, it’s actually 92 now because she just had another birthday but we’re all over the place,” said Blackrocks Brewery Co–Founder, David Manson.

Other than offering employment for a bounty of residents and distributors who are ensuring products get on the shelves, local artists and bands are given the opportunity to connect with the community in ways not previously available.

“The idea of the community space really was meant for it to be a community meeting spot and we really wanted that space to be defined by the people who used it, so that really is our community. I think that is what happened over the last five years, different people coming in with different ideas on how to use the space and it really does warm my heart to see all these different events happening,” said Pernsteiner.

So what is the future of breweries in the city?

“I’m constantly hearing about people who are interested in microbreweries but I do think one of the next big things is going to be micro–distilleries. You are starting to see those pop up around the state as the state is adapting laws to help with distillers and being able to do small batch distilleries,” said Schneider.

“It’s important for a community to have a brewery scene,” said Doyle.

“People from all over the neighborhoods and community can come in and meet each other along with new people. They can just relax and enjoy,” said Manson.
One beer at a time.