MARQUETTE — Last week, local historians came together to discuss a dark period of American history with an audience at Northern Michigan University.

“When people think about the Klan, they usually only think about two main periods in US history: the reconstruction period after the Civil War and the Civil Rights movement in the 50’s and 60’s,” said Marcus Robyns, an archivist at Northern Michigan University. “However, the Klan’s actual greatest level of success occurred in the 1920s.”

In the apex of the mid-1920s Ku Klux Klan movement, between 4.5 and 6 million people belonged to the organization and dominated several facets of state and local government across the country. The Klan was created as a reaction to a large amount of European immigration and an upsurge in socialist activity in the country.

While the KKK’s anti-African American stance hails as their most notorious agenda item, the group’s dynamic also included xenophobic and anti-religion components, often targeting Catholics. In addition, the Klan supported prohibition laws aimed at amoralistic practices such as dancing and drinking. Nationally, 1924 and 1925 saw the height of the movement. Though numbers started dwindling by 1926, the KKK was still alive and thriving in the Upper Peninsula. 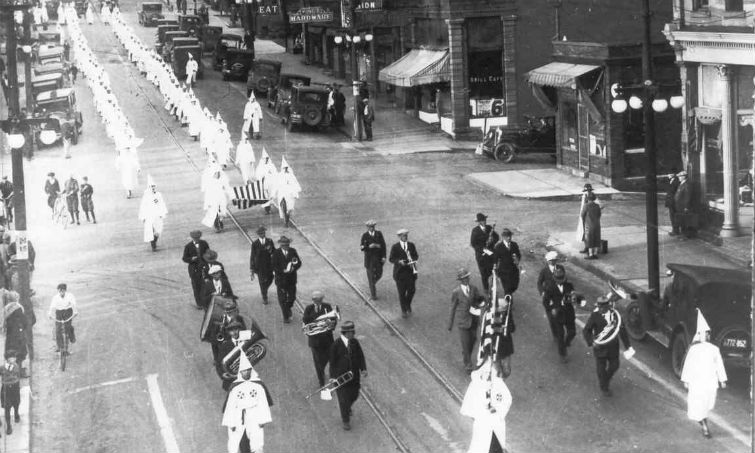 “People are always shocked to find that out,” Robyns said. “They’re always shocked when they see the parade of hundreds of Klansmen marching through Marquette. We’re pretty certain there were no African Americans living in the area.”

KKK members resided heavily in Iron County and in Sault Ste. Marie. The overwhelming support for the Klan in the Sault led a published paper. And over 2,500 Klansmen participated in a rally in Quinnesec in 1926, burning a 36-foot cross in the process. Hundreds of unmasked Klan members marched along Washington Street in Marquette on Labor Day in 1926.

Michigan had recently passed a law illegalizing the wearing of masks in public, a tactic to dissuade the KKK. Michigan’s legislature was relatively Klan-free, but other states, like Robyn’s home state of Oregon, state governments were oversaturated with Klansmembers, leading to corrupt politics. Robyns uses the Labor Day picture as a teaching tool in his classroom to exemplify dark parts of history we chose not to acknowledge as well as how to archive historical documents. He says he also can’t help but compare the 1920’s movement to our current political predicament.

“I think it can be said that there are a lot of parallels between the experience with the Klan in the 1920s and the unfortunate political discourse we have going on right now,” said Robyns. “It’s very xenophobic, very nativistic, with racist elements to it. It’s not surprise that the Klan was very supportive of our current president. And it was very anti-religious. You can easily exchange Muslim for Catholic.”

ISHPEMING — Thursday on ABC 10 & CW 5, ABC 10’s Chelsea Birdsall explores the history of the KKK in the Upper Peninsula. Join us Thursday at 5:30 p.m. and 6 p.m. for this week’s ABC 10 Feature. Chelsea will interview local historians and experts to learn about the influence the organization has had on the U.P.

Northern Michigan Wrap Up Semester With A Win