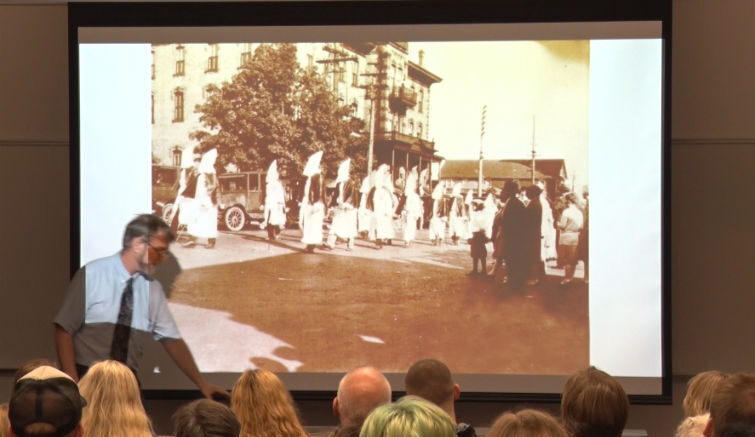 The presentation titled ‘The Skelton’s in Our Closet: The KKK in Michigan’ addressed the U.P’s large presence of KKK members back in the 1920’s. NMU Archives teamed up with Frank Boles from Central Michigan University and Jessica Holman, the director of the Negaunee Public Library for the event.

According to Holman, the KKK had a large following in the U.P. as demonstrated by a 1926 rally that brought Klan Members from across the Midwest to Negaunee. Sault Ste. Marie and Iron County harbored a large amount of KKK sympathizers as well.

“I got involved in this when a couple of months ago, I had some middle school students ask about the photo of the Klan rally from back in the 1920’s and they were quite offended by it and I said ‘Good, you should be,” said Holman.

Holman spoke more about the public’s reaction to the photo that hangs on display at the Negaunee Public Library during her section of the presentation. While the presentation was educational on the topic and how the archives stores artifacts and documents, the trio also took some time to discuss opposition they face as they bring the dark times to light.

To learn more about the KKK’s presence or any other historical incident in the U.P, you can visit the NMU Archives, which is open to the public.

Michigan Authors make a visit to The Negaunee Public Library