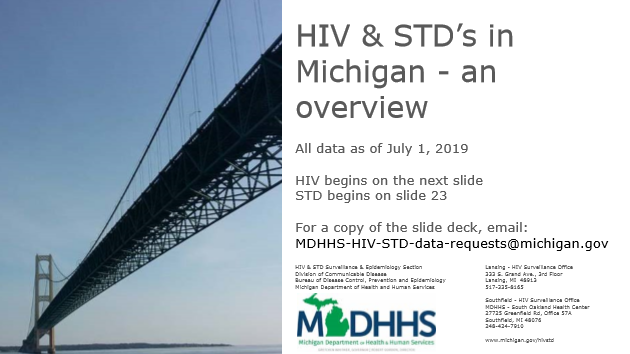 UPPER PENINSULA — According to a report recently released by the Centers for Disease Control, the number of sexually transmitted diseases across the state of Michigan is rising.

The Michigan Department of Health and Human Services is now encouraging all sexually active adults to get tested regularly for STDs.

Doctor Kevin Piggott, Interim Director for the Marquette County Health Department, says that some of the most common sexually transmitted diseases are the ones that are not reportable, such as HPV.

“Actually the most common STDs aren’t necessarily the reportable ones,” said Doctor Piggott. “Probably the human papillomavirus is the most common sexually transmitted infection, but it’s not a reportable illness. Therefore, we don’t have numbers on it. But it’s a very important one, because not only is it associated with the development of genital warts, it’s associated with cervical cancer, and actually a few other cancers as well. That’s why it’s also part of the routine immunization recommendations.”

Doctor Piggott compares using a condom to wearing a safety belt in a car. A safety belt reduces a person’s likelihood of dying in a car accident. However, it does not mean that person will never get into an accident, and it doesn’t guarantee that they won’t die in the event of a crash.

In the beginning stages of a relationship, it is important for partners to discuss any sexually transmitted diseases they may have.

“If a person is going to be entering a sexual relationship, they need to take appropriate precautions,” said Doctor Piggott. “They need to be open and honest in regards to partners and whether or not a person has had or has sexually transmitted infections. That needs to be relayed.”

To read more of the study and to see statistics on sexually transmitted diseases in Michigan, click here.