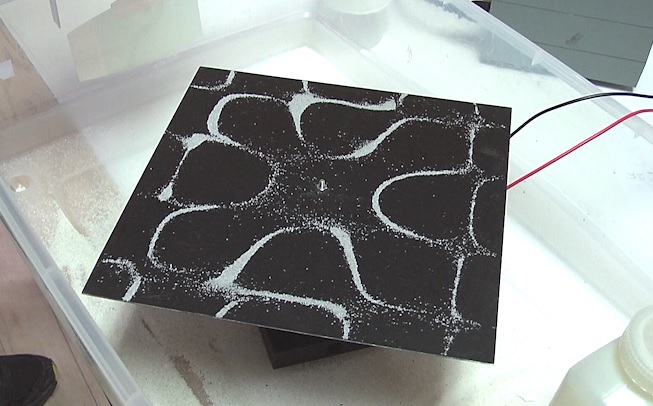 HOUGHTON — Hundreds of Keweenaw area students visited the campus of Michigan Tech yesterday as they took part in all sorts of fun and games, and all in the name of science. The Western UP Science and Engineering Festival brings elementary and middle school students, and their families, from many areas to take part in hands-on activities and experiments.

The sky is the limit as more than 100 Michigan Tech student volunteers help put the event on that engages young pupils in everything science from under water robots to sound waves and rocket ships.

“We have some new organizations, the Keweenaw Rocketry Club, Biomedical Engineering is here, the Society of Physics students always come out and they have a lot of fun,” said Chadde.

“What we have here is a metal sheet on top of a speaker and the speaker is hooked up to a frequency generator,” said Reed Downs, an MTU physics student. “At certain frequencies the waves reflect off of the sides of the metal sheet in various patterns such that it creates lines in the salt where the plate isn’t vibrating and no salt where the plate is vibrating more.”

Some exhibits demonstrate the laws of physics in our daily world.

“It’s very common seeing it in every day life,” Downs said. “Have you ever experienced the phenomenon where when two over lap, a bigger wave happens and then they split and go there separate ways? So that’s where that happens.”

Another Item from the sea was a demonstration of a chemical reaction that’s used in the food and drug industry that derives from sea weed.

“Sometimes they use it for food,” said Ariana Tyo, a biomedical engineer student at MTU. “There’s molecular gastronomy which are like really really fancy restaurants that want to have fun with it. They’ll use alginate as a vessel to carry other things and that’s what drug delivery is also trying to use. They’re trying to use alginate and it’s ability to for these needs to inject drugs or form the beads around the drug, and then you can have a controlled release.”

Spectators spent three hours touring the exhibits of the STEM Festival in the Memorial Union Building, while participants in the Science Fair anxiously awaited to here what the judges had to say.

“It’s for K-8 students and their families, and they can just go visit table to table,” said Chadde. “There’s a lot of things that kids can take home. Ice cream vase is always popular of corse because they get to eat it. It’s just a fun place to learn about science and engineering.”

Clean Snowmobile Challenge kicks off in the Keweenaw

Islam in the U.P. – Muslim population in U.P. growing

Two powerhouses team up for a healthier community