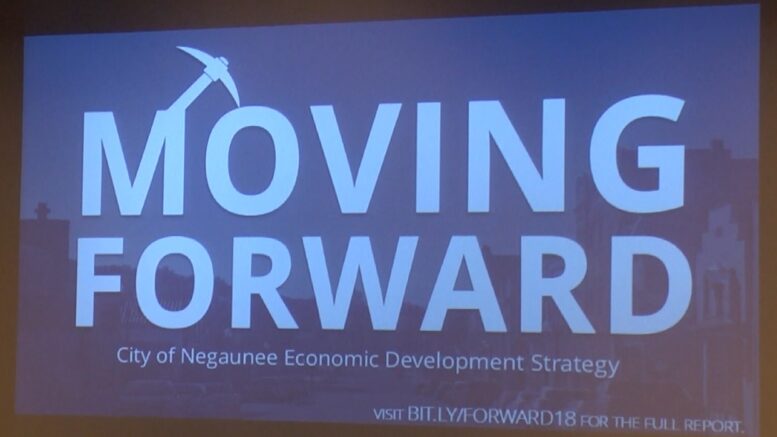 NEGAUNEE — The city of Negaunee, along with the Lake Superior Community Partnership, held an event Monday night to show the public their economic development strategy titled “Moving Forward.” The five year plan showed the different ways in which the city can grow and the tools that it can use to achieve those goals, such as grants.

The strategy, which is months into the planning phase, will look at ways to change and improve upon the city without changing its history. Negaunee City Manager Nate Heffron emphasized the importance of keeping those historic parts of the city intact, while also adapting to grow for the future.

“This plan has taken several months to formulate,” said Hefron. “And it takes a forward looking view of what this community should be doing, but also keeping in mind the historic aspects of the community and it’s character. So we don’t want people to think we’re just going to leave everything Negaunee is, or was, behind. We’re going to utilize part of that in our planning to keep that part alive, but we also have to change, with how things are changing in the economy, and things are changing in the world. If we don’t do that then we will definitely be left behind.”

One of the aspects of the plan will be to look at options for improving the downtown roads and landscape, which will mainly be handled by a new Downtown Development Authority.

“Some things that we’re looking forward to initializing with this plan would be our downtown development authority,” Hefron added. “Which Negaunee has had in the past, and it didn’t work out, but now we’re working towards a goal to make that thing a reality again, because that’s going to be a vital part of making sure we have economic success in the community.”

The plan highlights some specific areas or buildings within the city that could benefit from different grants or approaches to help improve the region, with a focus on buildings such as the Kirkwood building, and the Vista Theater. Early aspects of reinvigorating the downtown area notably comes from Tino’s and Smarty’s Saloon, which have benefited from Facade grants.

“One of the things that we’ve utilized are MEDC funding for facade grants. So Tino’s and Smarty’s in our downtown received new facades. And asking these owners how their businesses have been doing since going through this process, they both have indicated that they have seen a 30-40% increase in business. So it’s amazing to see how opening up a business store front with windows, so people can see what’s going on inside results in higher yeilds and sales. And that’s what people need in this community, is more sales, so they can stay in business.”

Hefron knows that small towns have to work to stay alive, and he says they will do everything they can to show people that Negaunee is open for business.

City of Negaunee to begin rental property inspections in March

Crews flush out hydrants in Negaunee