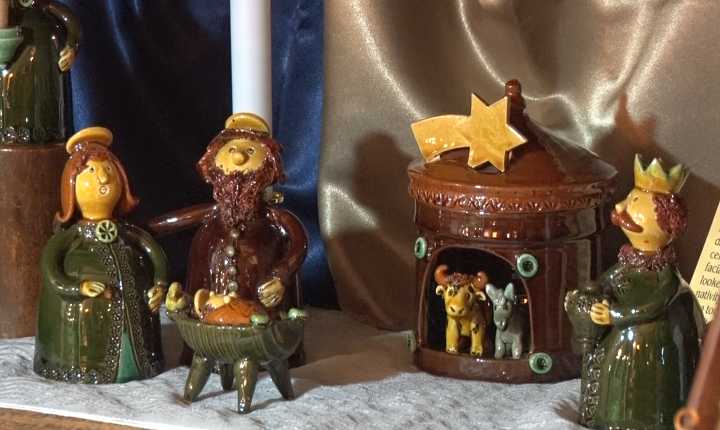 MARQUETTE — There are more people collecting nativity scenes than you might think, but one woman has taken her collection and turned it into gallery, and for a good cause.

There are collectors everywhere but this local couple from Marquette has a somewhat unusual collection of creche displays. They have been collecting for twenty or more years with different sets coming from all around the world from Ghana to Galapagos, Austria to Australia.

It didn’t start off as collecting for the pair. Having been raised in the thumb of Michigan it was a tradition to collect nativity scenes from Frankenmuth’s Bronner’s Christmas Wonderland.

“Number one, of course, the nativity story is the basis and the focus of the Christian world and it is what Christmas is all about. Secondly, I think it’s the international flavor of this that shows how cultures, different peoples, around the world interpret this story, and I think, thirdly, that the art media is really surprising,” said owner and collector, Carol Margrif.

Eventually, they would find scenes whenever they traveled as would friends and family and soon they had about three hundred different nativity scenes in their home.

They have partnered with Habitat for Humanity several times over the years allowing people to view their home and make a contribution to the organization, in Marquette, and throughout the U.P.

“Yes, the first year we did this we had about sixty out, and we had just small groups, mostly from our church and our friends, come in and enjoy them and then I had this thought one day about open a home to build a home. We were supporters of Habitat for Humanity in this county and I thought we could do this as a fundraiser for them, and that was a really, really exciting year for us. That just felt so good,” shared Margrif.

This year they will partner again, but it is even more special, as this will be the first and last time all of the nativities will be able to be viewed at once.

“I don’t always get them out at once, and you try to think, okay, what do I want to do next year, before you put them away. I feel like this pretty near the end of the collection period of my life and let’s just see if we can’t put them all out in our house at one time.”

The last opportunity to view all of the pieces together will be this holiday season at their home, 128 Timber lane, Marquette. Dates and times to view the pieces are as follows: