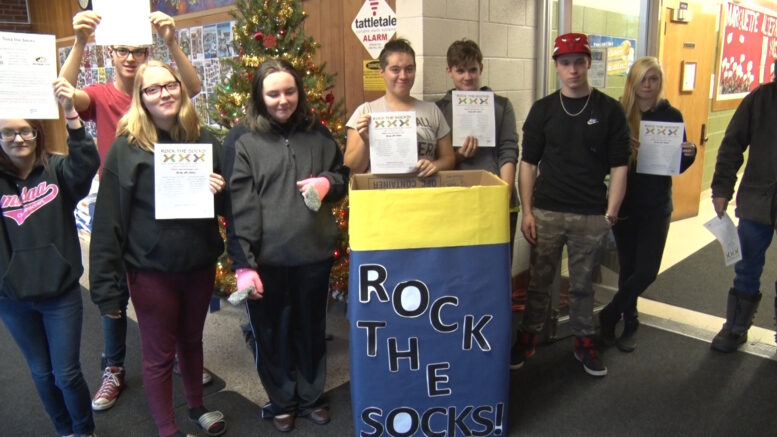 MARQUETTE — During the Christmas season, many people get things they want. But believe it or not, there’s one item on most people’s wish lists, even year round, that most people don’t get.

Cindy DePetro’s students at Vandenboom School are working to change that. This year, they will be participating in the 6th annual Rock the Socks event. Her students did some research and figured out that the most requested – yet least donated item – was socks.

“So they decided that they were going to do a fundraiser, and organize all of it…the whole class does it and then we give the socks to the people in need,” said Courtney Shiflett, a student of DePetro.

During the first year, students managed to collect and distribute 1,000 pairs of socks to various organizations across the county. Heading into their sixth year, that number has risen to over 3,200 pairs of socks donated every winter.

“They don’t care about the competition, ‘who’s going to get the most socks, who’s going to do this?’ It’s more about ‘what is the greatest need in our community, and what can we do to help fill that need?'” said DePetro.

Northern Michigan University is even joining in on the fun. They have a few sporting events that will provide a chance to donate. During the Hockey game on Saturday December 16th, and the Men’s and Women’s basketball games the following day, fans will be able to toss socks on the playing surface to donate. It wouldn’t hurt wearing a pair of funky socks either…students in kindergarten through 12th grade can get in free.

While being able to help out the community, DePetro’s students are learning a lesson in selflessness.

“Our students would be the first to admit that they often have their own needs. So they’re putting their needs aside and doing something for the homeless and those who are less fortunate right here in Marquette. It’s pride in letting the students do something to pay it forward to their community,” said DePetro.

A community that has done so much for them already.