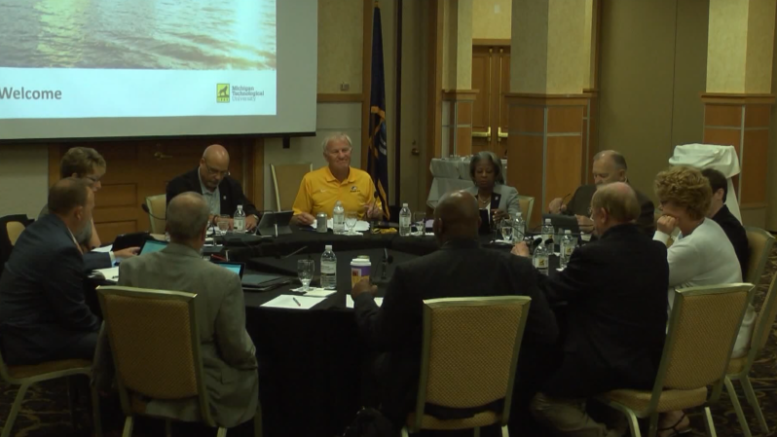 HOUGHTON — The Michigan Tech Board of Trustees met to present updates on the presidential search and numbers from the 2017 fiscal year.

Campus is buzzing in honor of Alumni Weekend, but the Board of Directors at Michigan Tech still met to discuss university matters. The Chairman of the Presidential Search Committee Bill Johnson presented an update on replacing current president Glenn Mroz.

The committee has selected the firm of Storebeck/Pimentel out of Pennsylvania to carry out the search and hopes begin interviews in early 2018. Johnson said they have already found seven potential candidates for the position.

He also said that inclusivity and transparency are key factors in the search process.

“Confidentiality is important in terms of the candidates in this process, so we will not divulge their names, but everything else, we’ll be very transparent about. That results, really, in a better outcome for everybody,” said Johnson. “This is a very important process for the university and for all the people who dedicated their life to the university here. We want to make sure everybody has an optimal opportunity for input and that’s what we’ll do.”

A Presidential Transition Committee was formed to plan how to best acquaint the successful presidential candidate with the university and it’s key areas of need and interest. The board also discussed financial matters.

“During the 2017 fiscal year, the university received $59.7 million in research from federal, state and other sources, half of which when to the College of Engineering. This is an increase of $8 million from last year.”

The Tech Fund saw an increase as well, raising $52.4 million over the fiscal year.