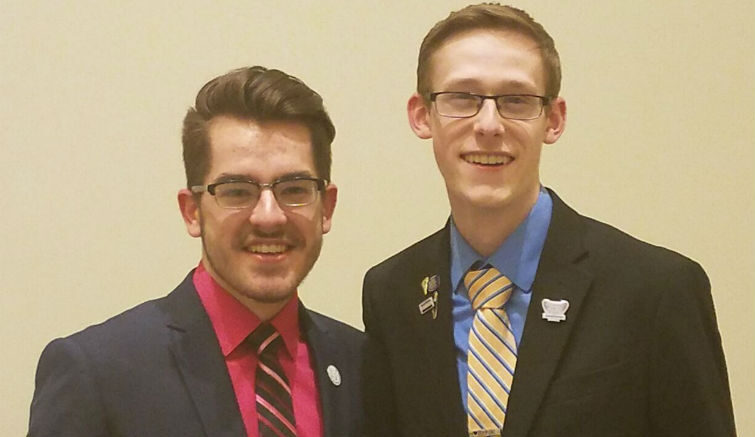 ESCANABA — Two Escanaba High School students were recently elected to the national officer team for the Business Professionals of America.

Business Professionals of America (BPA) held its National Leadership Conference in Orlando, Fla. on May 10-14, 2017. More than 6,000 conference participants traveled from 19 states and the territory of Puerto Rico to compete in various business related skills-based competitions and receive recognition in community and school service projects.

Two students from Escanaba High School were elected to the national officer team to lead the organization next school year. Jacob Taylor, a 2014 graduate of Escanaba HS and 2017 graduate of Northwood University, was elected to serve as the 2017-2018 National Postsecondary Division President, and will also serve on the National BPA Board of Trustees.

Taylor recently graduated from Northwood University with a degree in finance and plans to continue at Northwood for another year to earn his MBA. Taylor states, “BPA teaches students basic life skills, such as communication, professionalism, time management, as well as it provides an opportunity to network with so many new people of completely different backgrounds.” As a national officer he plans to work on increasing membership in the organization and help increase the networking opportunities provided to the
student members.

Jon Perrault, a senior at Escanaba HS, was elected to serve as the 2017-2018 National Secondary Division Vice-President. Perrault plans to attend Northwood University and pursue a dual major in Business Management and Entertainment, Sport & Promotion Management. Jon currently serves as the president of the senior class as just completed his term of office as the 2016-2017 Michigan BPA State Secretary/Treasurer.

Perrault says, “I joined BPA to gain real life skills including public speaking, confidence, and leadership experience and to get to know students from around the country.” His goals are to promote professional development for students and to create an internship directory for secondary students. ​

Their term begins immediately and will conclude at the end of the 2018 BPA National Leadership Conference held in May 2018 in Dallas/Fort Worth. In addition to their achievements being elected to national office, Taylor received the third place award in the Legal Office Procedures competition and Perrault was recognized as a Merit Scholar recipient. Escanaba High School also earned the national Membership Explosion Award.

Business Professionals of America is a national career and technical student organization consisting of 19 state associations and more than 50,000 members from over 2,700 chapters. The organization serves students who are currently, or were previously enrolled, in a business education program at a secondary or postsecondary institution. Chapters are located in high schools, career/technical centers, postsecondary technical institutions, junior and community colleges, and colleges and universities. Michigan is the fourth largest state in the organization with more than 4,300 student members.