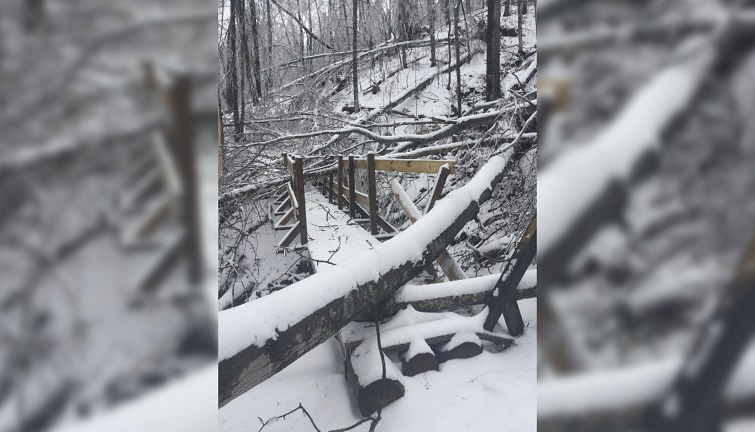 Roads have been reopened at Porcupine Mountains Wilderness State Park in the western Upper Peninsula after an ice and snow storm felled hundreds of trees at Michigan’s largest state park late last week.

“We had crews out over the weekend cleaning up and assessing the damage,” said Jeff Gaertner, park supervisor. “All roads are open and passable, but park motorists should expect some wood and debris on park roads.”

Road 107 to Lake of the Clouds and the road to Summit Peak were closed late Thursday, April 27 as trees weighted down and weakened by a thick coating of ice and snow continued to fall, hampering the efforts of clean-up crews.

The road to Lake of the Clouds reopened Sunday and the road to Summit Peak Road was opened today.

“We have not been on all the trails yet, but so far it looks like the majority of the damage begins around 1,000 feet elevation and continues higher,” said Bob Wild, a Michigan Department of Natural Resources interpreter at the park. “The lower elevations, like those near Lake Superior, did not get as much ice.”

Of the trails inspected so far, the Government Peak Trail in the park’s midsection, the Overlook Trail east of Lake of the Clouds and the Cloud Peak Trail have been impacted most heavily.

“In one section of the Government Peak Trail, there are over 300 trees down and across the trail within a 4-mile stretch,” Wild said. “There is also damage to some foot bridges and many sections of boardwalk.”

Over April 26-27, higher elevations at the park received up to an inch of ice, which was then covered, by 2-4 inches of snowfall.

“Park visitors are urged to continue to use caution and watch for the potential of falling branches or trees weakened by the recent storm,” said John Pepin, DNR deputy public information officer.

Last summer, Porcupine Mountains Wilderness Park was struck by two consecutive storms — the first in the west, the second in the east — that felled numerous trees onto trails, flooded creeks and streams, which undermined riverbanks and toppled more trees. One cabin had to be relocated and several campsites and cabins were temporarily closed.

GOGEBIC COUNTY — Wintry weather over the past two days has felled trees, blocking trail and road access to some popular visitor attractions at Porcupine Mountains Wilderness State Park in the western Upper Peninsula.

“Over the past two days, the higher elevations in the park have received up to an inch of ice, covered by 2-4 inches of snow,” said Bob Wild, a Michigan Department of Natural Resources interpreter at the park. “The trees are thickly coated and this much ice really adds a lot of weight and stress to the trees, causing many to topple.”A bridge damaged by fallen trees at Porcupine Mountains Wilderness State Park is shown.

Late Thursday, park staff closed the roads to Lake of the Clouds and Summit Peak because of downed and falling trees. These sections of the park, in the northeast and north of the South Boundary Road were the most heavily impacted.

“Our crews have been out clearing downed trees, but the wind continues to blow more down,” Wild said.

Highway 107, which leads to Lake of the Clouds and the road to Summit Peak remain closed. The South Boundary Road is open.

“We will have a crew working over the weekend to clear roadways and begin evaluating the trails, bridges, and other structures throughout the park,” said Jeff Gaertner, park supervisor. “More crews will be out early next week to evaluate the condition of the trails at the park.”

DNR officials were urging park visitors to remain aware of the possibility of falling branches or trees. Visitors are also reminded to observe the park road closures.

Chimney fire sends one man to the hospital