Art is a medium that knows no bounds.

The Legacy Trust Award Collection’s Fifth Annual Competition for Artists with Disabilities is living proof, giving visionaries who’ve overcome a mental or physical barrier a chance to let their inner strengths shine through.

The competition is just a few weeks away, so we decided to sit down with one of last year’s shining stars who happens to live right here in the U.P.

“It’s not always the final project, it’s the process of getting to that final project – that’s the where the art is,” noted Rudy Brinks, a local SAIL artist.

If that’s the case, then Rudy Brinks embodies the artistic process. Like most who achieve greatness, Rudy has done battle with his fair share of inner demons.

“I have a lot of social anxieties and depression issues myself. I find painting is a way to relieve myself of some of these issues. It keeps me sane I guess – drawing, painting, creating,” Brinks laughed.

And he’s created quite a bit through the years. It all started with his fascination for a medium that isn’t always held in the highest regard.

“Comic books – entertaining my brother and my cousin. They’d come up, and we’d read comic books and come up with our own superheroes. They’d ask me to draw them and so I’d do that. Then, I’d collect the comic books and just sort of taught myself from there.” 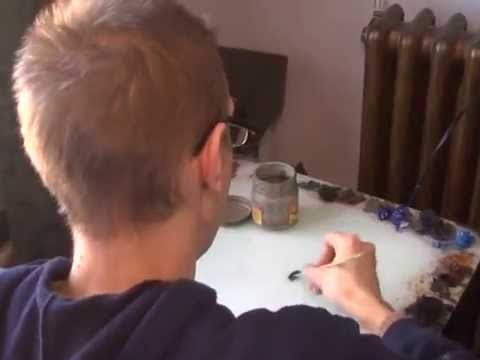 Since then, each piece has helped him chip away at his mental block and flush out any deep-seated anguish.

“Being able to paint does sort of draw you out of some of the current situations you might be struggling with and brings you to a whole other level or place, I guess.”

His current place, which he has converted into his very own studio, was found by the people at the Superior Alliance for Independent Living; the same folks who suggested he enter the LTAC Art Competition.

“Getting yourself into something like that is definitely rewarding. It’s rewarding to see if I can create something. If it comes out good, it just makes me feel so good. I don’t know. There’s a lot of satisfaction in creating.”

His creation, which merges new technology with America’s rugged past, received one of the top honors at last year’s competition.

“Robots become best friends for a lot of people, at least for me. I’m on the computer all the time.”

It’s ironic that Rudy struggles with social anxiety, when you consider how life-like and intimate each of his paintings are.

He’s even tried his hand at pinning down his own wrinkles, but there’s still some work do be done.

For the time being, he’s hard at work preparing for this year’s competition, which happens to be in his home town of Grand Rapids, and a new art class that he’ll help teach through SAIL; allowing him to help others in a similar situation find the same solace that he holds so dearly.

Accident delays US 41 traffic near Humboldt

UP Builders Show, now with new name, being moved to Westwood Mall

Start the Cycle still being held for winter season