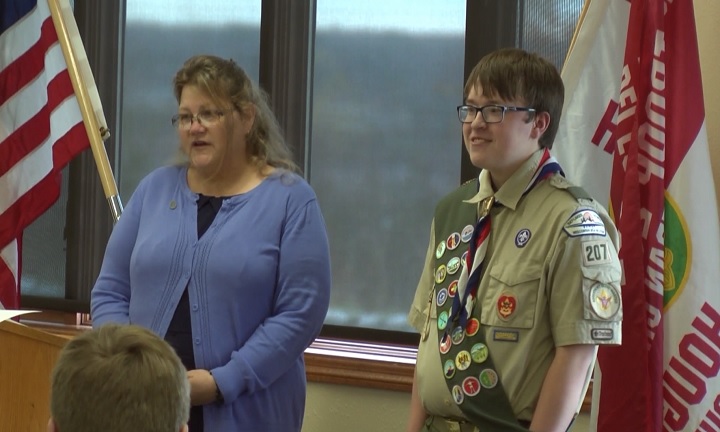 HANCOCK — A young Hancock man is celebrating his achievements after being named Houghton County’s newest Eagle Scout. Eighteen year-old Korey Ericson was joined by friends, family and fellow parishioners yesterday who all gathered for the ceremony at Zion Lutheran Church in Hancock.

Camping, hiking and Pinewood Derbies are usually the first things to come to mind when you talk about scouting, as most boys stick with it for a few years and then find other interests. Scout Korey Ericson of local Troop 207 has stayed with his ambitious desire to “do his best to fulfill his duty to God, country, other people and self” and that ambition has earned him his status as an Eagle Scout.

“Korey has put a lot of tradition, a lot of family involved with his Eagle project. His favorite merit badge was one that he got by going to the Tilden Mine, it’s called ‘Mining in Society.’ It just happened to be the mine where his dad and his grandfather both worked. We’re very proud of Korey. He’s a good boy,” said Kevin Ericson, Korey’s father.

As part of the ceremony, fellow scouts and scout masters honored Ericson as they highlighted some of his achievements. Among other things mentioned, Ericson once built a set of benches for his church that are still in use today. He was also commended for being an outstanding citizen and a good role model, and was also presented with an award from the Michigan Senate, signed by Governor Rick Snyder.

“If you want to do something don’t stop. Just keep going and make it to the finish line. Never give up,” said Ericson.

Ericson is the first member of Troop 207 to make Eagle Scout in four years, and says he’s on his way to becoming a scoutmaster.