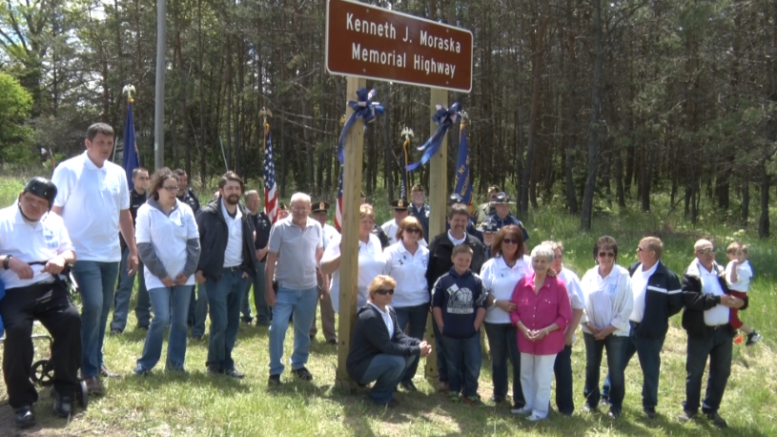 NORWAY — An unveiling ceremony renaming a portion of U.S. 2 in Norway in honor of fallen Police Officer, Ken Moraska was held today.

Family, friends, and fellow Officers gathered on the side of U.S. 2 for a ceremony honoring a fallen police officer who left a great impact on his community. A portion of U.S. 2 in Norway was renamed today, to the Kenneth J. Moraska Memorial Highway.

“It’s pretty difficult to tell you how exactly anybody feels about it, it’s wonderful no doubt about that, but it doesn’t bring him back. It just brings back memories that the community stood behind him and his family, of course,” said Brother of Ken Moraska, Jim Moraska.

This ceremony was long in the making, starting with a bill that was introduced by former State Representative, Ed McBroom.

“It was great to see the project finished, this was one of the last bills that I introduced when I was in the legislature and worked very hard to get it done before I was termed out of office. It’s great to see what a meaning it has to the whole community, especially the Moraska family and the city police department,” said Former State Representative for the 108th District, Ed McBroom.

Governor Rick Snyder officially signed the bill into law in December of 2016. Moraska was a Norway Police Officer who died by gunfire while responding to a domestic disturbance on May 23rd of 1971.

“It’s just a tragic thing what happened and you just never get over it,” said Moraska.

Moraska is being remembered for what he was passionate about, which was the community and keeping it safe.

“I think the most important thing is just the remembering the life of Kenneth Moraska and the life that he gave for this community,” said McBroom.

The portion of U.S. 2 dedicated to Moraska is on the west side of the city of Norway.

Donation made to help veterans’ home