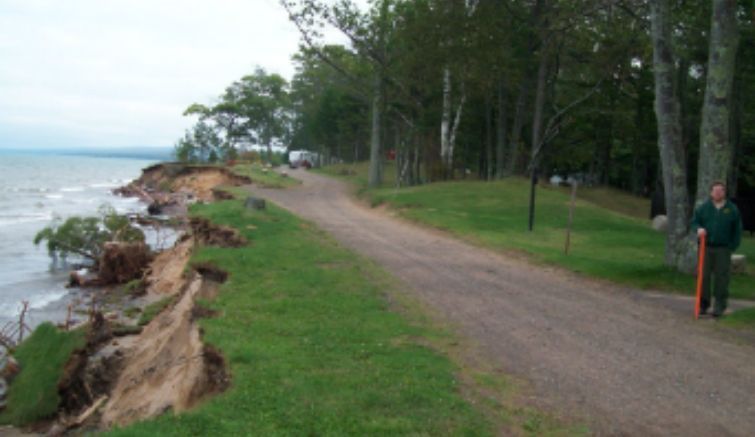 HANCOCK — While erosion continues to eat away at the campground at McLain State Park, the Michigan Department of Natural Resources is planning to make several changes.

Work was slated to being this spring, but the project had to be put off until after Labor Day.

DNR Unit Supervisor Jamie Metheringham said, “We wanted to wait until after the busy camping season to avoid interruptions in camping here now as well as get time to get the contacts out and bidded.”

Phase one of the project includes a new shower and restroom facility, plus 20 new campsites near the front of the campground that will be completed sometime next year. Later on, the park plans to expand the day area at the West Portage Entry, known as Breakers, to make up for space that will be lost near the park entrance.

This season, campers are only being charged the “semi-modern” rate for campsites and mini-cabins, even though the facilities are fully operational.

Metheringham said, “There’s been multiple-hundreds-of reservations made already throughout the summer. That price is already set. That was determined at the beginning that we were going to have the semi-modern rate in case the toilet and shower building wasn’t available, and if it was available, then people are going to get a good rate for this year.”

With $3 million in upgrades, park officials say the temporary inconvenience will be worth it.