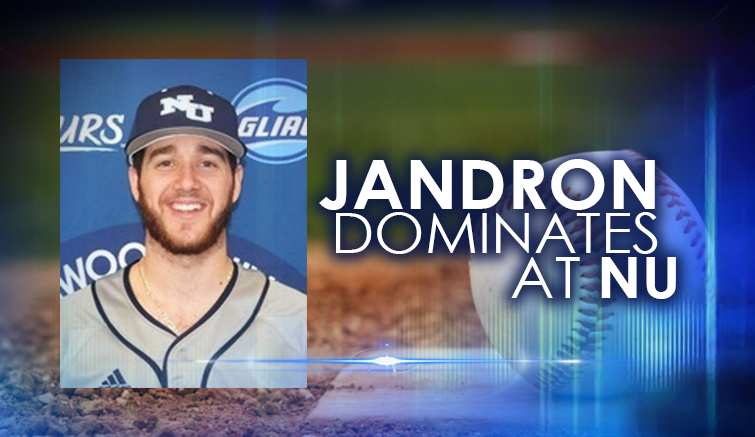 NEGAUNEE — Tyler Jandron was a standout athlete in baseball and basketball for the Miners, and now that U.P. grit is showing up in his college career at Northwood University.

This week, Jandron was named GLIAC Pitcher of the Year after leading the Timberwolves to their first regular season championship in program history. This is Jandron’s first year with Northwood, after spending two years at the University of Wisconsin–Parkside, playing both baseball and basketball. He credits his success this season on going all–in with one of his two favorite sports.

“Being able to just focus on baseball, and learn a lot more. In the mental aspect, our head coach Jordan Beschel has helped me tremendously on just learning the in and outs of it all. And having Tony there makes it easier because I can communicate with him obviously as a coach, but obviously as a brother so it helps me a lot I think,” said Jandron.

Jandron finished the year earning the GLIAC triple crown, leading the conference in wins, ERA and strikeouts. He hopes their momentum will carry on into the playoffs.

“Our coach really preaches just having fun and that’s what our team does. We are really relaxed in the dugout. We never put pressure on ourselves, especially right now. We’re in a great position. All we have to do is go out and have fun. That’s what we’ve been doing this whole season. That’s what we do as a team. We put all the work in that we did during the season to be where we are today, and it has brought us here now. I think we can trust what we’ve been doing,” Jandron said.

In round one of the GLIAC baseball playoffs, the top–seeded Timberwolves beat Hillsdale 14–0. Jandron pitched a complete game shutout, allowing two hits, one walk while striking out 8 batters. They will face the loser of Tiffin or Walsh Friday in the second round.

Wildcats to face Chargers in Hillsdale