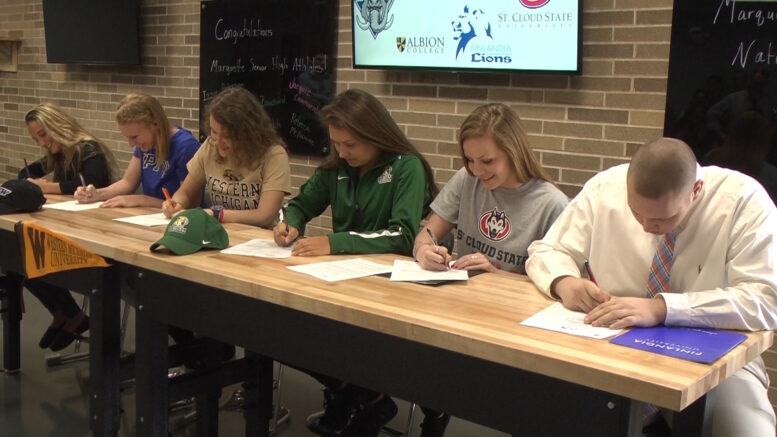 MARQUETTE — Swimmer Lyndsey Welch is taking her talents to Minnesota as she signed with St. Cloud State. And track teammates Hannah Detmers and Rebecca McNamee signed their NLIs as well. Detmers is going to Indiana Purdue Fort Wayne And McNamee is heading to Western Michigan. They talked about what they will miss most about Marquette and the U.P.

“It’s going to be different because I don’t have any friends going to that school. One thing I like about it is even though it’s far away, it’s still kind of the same environment or similar to the U.P.,” Welch said.

“The community that is here, it’s amazing. And I love how unique the summers are, and the fall and the winter. It’s going to be hard being away from the lake, but at the same time, I think I’ll adjust well,” said Detmers.

“I feel like the people in the U.P. are definitely nicer here than they are in a lot of other places, and that holds true with high schoolers and especially with runners. Especially with Marquette distance runners, we know what it’s like to run in the snow at races, so everyone feels for each other more and cheers each other on a lot. I don’t know if it’s going to be like that at Western, but I definitely will miss that here regardless,” McNamee said.

Izzy Peterson signed her National Letter of Intent to run track at Northern Michigan University. She said location definitely played a role in her decision.

“I think it’s super important. My whole family lives here. I grew up here. This is the place I know and it’s awesome for me to continue my education here. I think it just made it a little easier. Going to college is a whole new experience. But now a lot of my teammates are going to be there and I’ll have someone to go to who is a college athlete,” Peterson said.

Bryant Bouchard signed his NLI to join the young Finlandia football program, an opportunity that he will not take for granted.

“To me, I think it shows character and how much you are willing to put into it. The work, the effort, the time. It definitely takes a lot of dedication. To be able to say that I’m going to play at the next level, it’s a great honor and privilege, and I’m glad that I’m one of the few that can experience that,” said Bouchard.