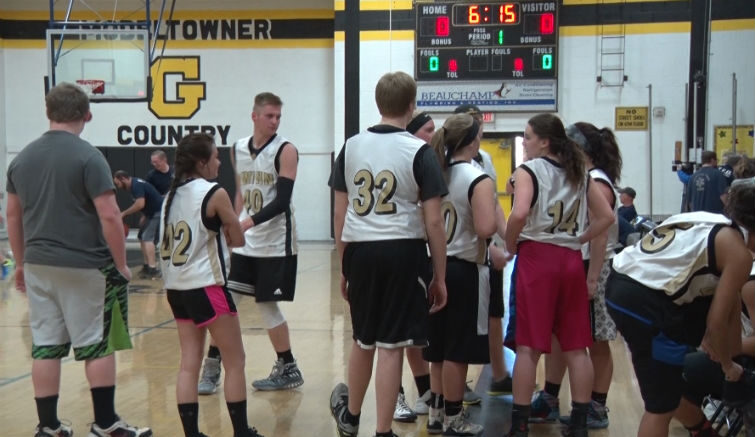 GWINN — It was Forsyth’s Finest against the Gwinn Senior Class as the two teams went head to head on the basketball court, but it was for a good cause.

The fourth annual charity basketball game was held at Gwinn High School Friday night in order to raise money for the senior lock-in at the end of the school year. The event is also a promotional event to encourage safe and sober graduation celebrations.

Each year hundreds of dollars gets raised for the lock-in, which leads to better prizes and higher turn-out. The game is a collaborative effort between the school and Forsyth Township EMS, Police and Fire Departments.

“We’ve got quite a turn-out here. We usually get 15-20 people from the EMS, the police and Fire Department. Some of them it might be the only exercise they get all year, but they come out here and they play hard,” said Co-Coordinator, Dave Dziedzic. “In fact, Forsyth’s Finest are undefeated so far, 3-0.”

And that trend continued as Forsyth’s Finest brought home the win for the fourth year in a row, 103-76. Dziedzic said this was the most successful game they’ve held with over $1,200 being raised for the senior lock-in. This year’s lock-in will be held the night of the last day of school instead of graduation night to schedule around the upcoming U.P. Finals.

Breaking and Entering leads to stolen items in Gwinn

Tough choices for Gwinn school board