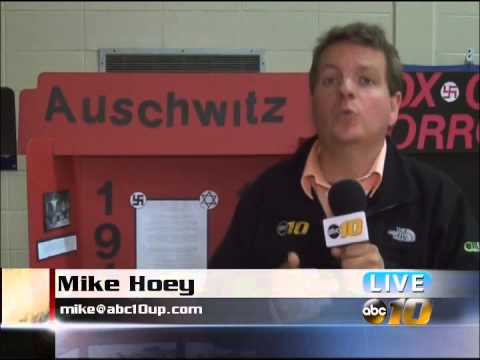 For four years of his childhood, Martin Lowenberg was held prisoner in five different Nazi concentration camps. He visited Kingsford Middle School Thursday to tell students and other area residents his survival story.

“It is important also to know that other people would try to destroy people in general for either religion or belief or for anything that they should show (of) why they would like to live,” he said. “That’s why I’m speaking.”

At one point, Martin was even held captive at Auschwitz for several weeks. His parents and his younger twin brothers were killed there. They were among the more than six million Jews killed in the Holocaust. When Martin was liberated in 1945 at age 17, the years of hard labor and starvation left him weighing less than 80 pounds. Martin and his sister Eva emigrated to the U.S. the following year.

“As years have gone by, there are more people who are so interested in history, and this was a very important time in history that needs to be remembered,” he said.

Martin says he’s grateful that students have shown what they’ve learned about the Holocaust in the form of fold-out posters displayed around him.

“I appreciate very much that they are gaining so much knowledge and also will never forget the history of what they learned about the Holocaust,” he said.

This is the twelfth year in a row Martin has visited Kingsford. School officials estimate more than 3,000 people in the area have listened to his story in that time.