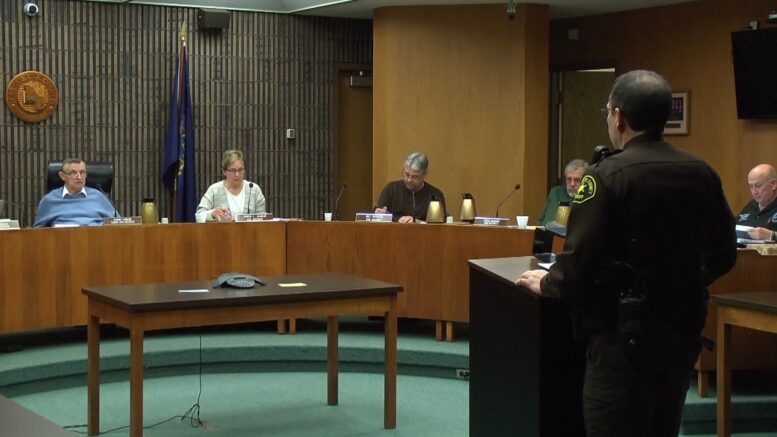 MARQUETTE — Tuesday night, the Marquette County Commission voted on and approved the purchase of a machine that will help keep the county jail safe. The body scanning machine which costs roughly $129,000 would be the first of its kind used in the state.

The vote was unanimous in approving the body scanning machine for the jail, which will be able to help prevent the smuggling of drugs into the facility. Sheriff Greg Zyburt and Undersheriff Dan Willey attended the meeting to make the case for the purchase, and explain why it is needed.

“Inside the jail, we’ve had prisoners trying to bring contraband, weapons and drugs,” said Sheriff Zyburt about the issue. “And they have been successful bringing drugs into the jail. So I started looking at different technology to help combat this. When I was at the National Sheriff Academy in Colorado, I spoke with other sheriffs from around the country, and a lot of them have already been researching this. So I was able to piggy-back on a lot of their research. And what the board did tonight was allow me to purchase, is basically an x-ray machine, which will allow us to scan people before they come into the jail.”

Sheriff Zyburt relayed to the commission the different ways in which the smuggling occurs, such as digesting the contraband or hiding it inside body cavities. Currently they do not have any way of finding this contraband, and they hope that the addition of the new technology will stop any further smuggling issues.

“You know, ever since I was chief in Chocolay, I’ve always really liked using technology to our advantage,” Zyburt added. “And it makes it safer, and a lot of times cheaper. So this is just another thing we’re adding to our list to help.”

Now with the commissions approve of the purchase, it will still take a few months for the machine to arrive, but Zyburt is hopeful that it would arrive by January or February. The purchase includes the scanning machine itself, a tablet for reading the scans, training the staff, and a 2 year warranty.

Suggitt’s request to be released on PR bond denied