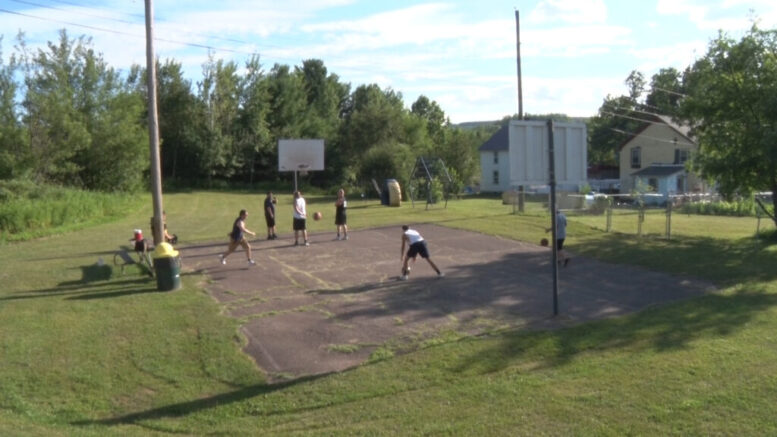 NEGAUNEE – This is a beautiful court and I don’t think it should be changed. Some things just need to be in their natural state, and the Buffalo Road Court needs to be one of those.

Located off of County Road 480 in Neguanee, the Buffalo Road Court, a court you won’t find anywhere else, was discovered by a group of guys about six years ago. What started out as simple pick up basketball games, in the middle of nowhere, has blossomed into a ten team, forty player, day long tournament.

“Getting these 40 guys together to celebrate this court and celebrate a nice summer day and play basketball, is kind of what it’s all about,” said Doug Lindblom, the organizer of the Buffalo Road Invitational.

The court is what makes the three-on-three tournament so unique. The rims hang about eight and a half or nine feet on a good day. It’s not regulation size. It’s cracked. It’s bumpy, and there’s grass growing on it.

“It’s pretty earthy here. I really enjoy that aspect of it,” said Ryan Tincknell. “Where else are you going to play where there is grass?You can’t play basketball in the grass except for here.”

Rumor has it that the court is being re-paved early next summer. But the guys are not worried about that right now. They are going to enjoy the last tournament on the court as best they can, even if they don’t have confidence in their team.

“I would expect maybe a seventh place finish out of our team,” said Tincknell. “I would like a championship, but seventh place is good enough for me. I would rate our team probably the last team in the tournament, but I expect to win at least one.”

The tournament is Sunday, July 22nd. It begins at noon and concludes with the finals at 6 p.m.