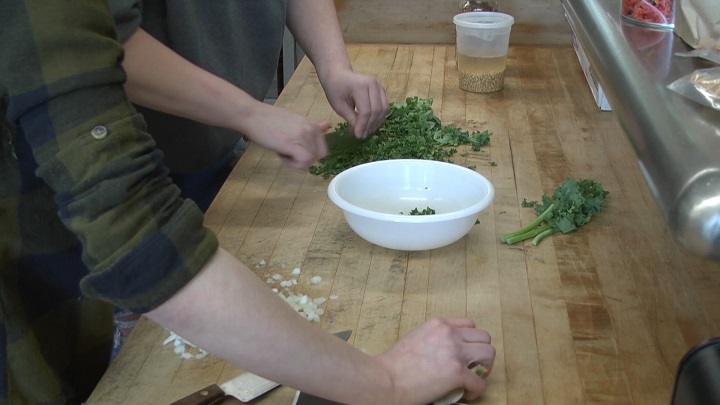 MOHAWK — As another school year will soon come to a close, a local non-profit organization is doing its part to make sure that graduating students are prepared for the road ahead.

Travis Bardo and his classmates are taking some last minute classes and learning the life skill of healthy cooking.

“They just made some chickpeas out of peanut butter. It was really good. I don’t know what is was all about but it was very good,” said Horizons Alternative High School Principal Joel Asaila.

The school has recently partnered with 31 Backpacks, an organization that provides supplemental meals to students. The non-profit organization provides the ingredients for the class’s lesson plan and two volunteers who donate their Friday afternoons to the program.

“We’ve been coming here, this is our third week just working with the students and help teaching cooking skills using everyday items that they can find in the grocery store so they can prepare it at home,” said volunteer instructor, Kathleen Harter.

The idea behind the program is to prepare kids for self sustainability as they enter college, the work force, or adulthood and parenthood.

“I love the kids’ enthusiasm and eagerness to jump in. Try new foods, they’re not afraid to try anything. Especially once they make it they’re really excited to try it,’ added Harter. Her and her co-captain Shelli Kargela lead the program.

Kargela says that the class started on a trial bases, and she was uncertain if it would be on going, but after an overwhelming response from students, it looks promising.

“This is just a blast. It’s great to be with these young people. They’re excited. They’re willing. They ask questions, they want to learn more. It’s just a blast,” Kargela said.

With two instructors, the class maintains its one-on-one teaching method that the school is known for.

“Horizons, basically our goal here is to work with the kids on a more individual basis. We try to keep it 7, 8, maybe 10 kids in a class to make sure that these students get one on one help. It’s a lot more one on one help, and its a lot more freedom for the kids,” said Asaila.

Along with his cooking skills, Bardo will be taking his earned knowledge with him to Gogebic Community College in the fall.

“I don’t think it would’ve happened if I didn’t come to Horizons,” he said.

College seemed out of the question for Bardo a year ago when he was struggling to pass in a conventional class room.

“I wasn’t supposed to graduate this year, but because of Horizons Alternative High and all the staff and all the help that we get here, I am now,” he said.

After college Travis is excited to start his career as an auto mechanic and a small business owner who is already looking out for his customers.

“I’ll charge a decent price, ya know, so people can afford it,” he said.

Asaila says that programs like the cooking class and contributions made by organizations like 31 Backpacks play a significant role in success stories of students.

“31 Backpacks has been huge for us. Laurel Maki, she comes up here and she donates a lot of her time. She’s done a phenomenal job with the 31 Backpacks program and its really been beneficial for our kids here,” said Asaila.

As Bardo is looking forward to college and his future, he says he’s grateful for his time at high school.

“Horizons is a big family. And I love it,” he said.

31 Backpacks gets donation in time for holidays