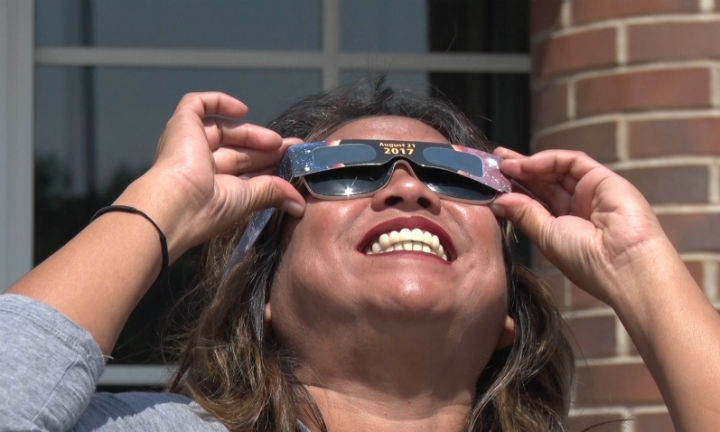 MARQUETTE — The highly-anticipated solar eclipse came and went Monday afternoon, and though it was only at 80 percent coverage here in the UP, locals still got a kick out of it.

Hundreds of locals came out to Northern Michigan University, where the Physics Department, the Seaborg Center and the Peter White Public Library teamed up for an eclipse viewing party. The star lab and telescope at the Observatory Dome were open for the public to use as it has a special sun filter that allowed onlookers to view the eclipse in its entirety, safely. But many others claimed spots on the lawn of the observatory, armed with special glasses to view the eclipse.

“It’s something that doesn’t happen very often,” said Amanda Pierce, the Youth Services Department Assistant at the Peter White Public Library. “The next big, total one they’re saying is in like 99 years for this magnitude again. It’s wonderful to see this much community out for an event and especially with everything that’s been going on, we love the support of the community.”

The library handed out 200 pairs of glasses to attendees purchased with a special grant and had craft stations set up for kids to make viewing glasses. And if that wasn’t enough, various classrooms were set-up for overflow visitors to see NASA live-streams from all over the country of the eclipse during full coverage. This eclipse traveling in the same line of totality will repeat in another 56 years.

Movie about the U.P. premieres close to home