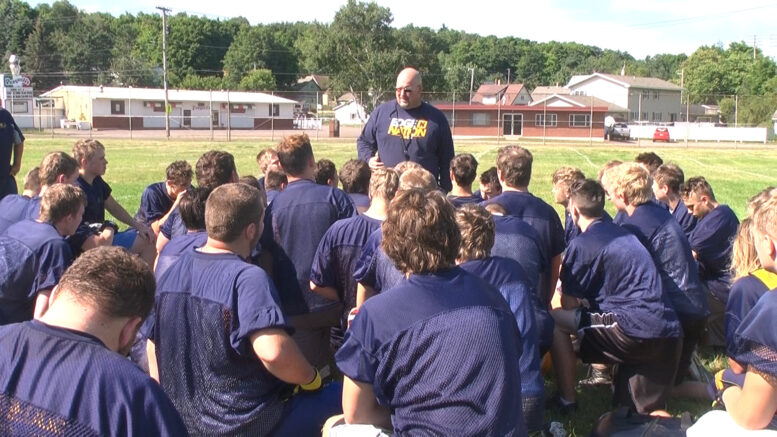 NEGEAUNEE — For the Miners football team, last year’s loss in the district finals game against Calumet is weighing heavy on the minds of the players at the first official day of practice.

“It was heart–breaking for me. I still think about it to this day,” fullback Jake Hill said.

“I just think about all our seniors last year and how heart–breaking it was to lose that game,” said wide receiver Jacob Ennett.

“I’ve always been the type of guy that you are only as good as your next game. It’s different team, different year. What’s in the past is in the past and what we have to do right now is do everything we can in our power to be ready for that first game,” head coach Paul Jacobson said.

The Miners are coming off their first undefeated regular season since 2004 and much of the credit goes to a stellar senior class that left a lasting impression on this year’s team.

“They taught me a lot because I was one of the only juniors that played last year, so I feel pretty good going into my senior year,” Ennett said.

“We got to be ourselves. We had lots of senior talent last year. We need a lot of people to replace that senior talent. We got to go out every game like we did last year with no fear and full confidence that we were going to win,” said Hill.

The Mid–Peninsula Conference is wide open this season and Negaunee needs this new senior class to step up in a big way for the team to have a chance at a second–straight MPC title.

“It’s difficult. You don’t replace a Shane Ring, Neal Violetta, Brock Aho, Jacob Paquette or Michael Pizziola. It’s tough. You don’t do that. But what you have to do is prepare yourself. The new kids in town, the new senior leadership, the new juniors that are going to take their place. They have to try to live up to that tradition that’s been established,” said Jacobson.

And with the first day of practice all wrapped up, the team’s confidence is steadily rising.

“It feels great. I have been waiting for this day since the last football season ended. I’ve been ready to just get back to work,” said Ennett.

“They have to just come to work just like last year’s team. They can’t afford to take a step back in a practice. They have to continue to get better and keep pushing each other every practice,” said Jacobson.

The Miners will open their season on the road on August 25th against Boyne City.