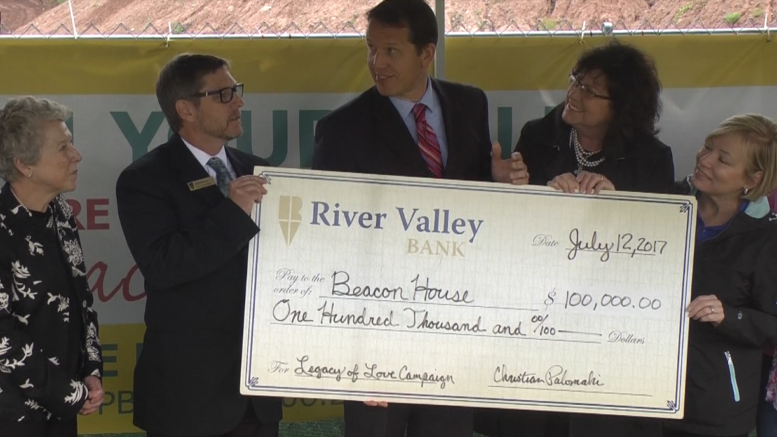 MARQUETTE — The Beacon House is one step closer to breaking ground on the campus of the soon to be new UP Health System Marquette hospital.

The Legacy of Love fundraiser created by the Beacon House kicked off today with a check presentation of $100,000 from River Valley Bank. These funds represent a five-year pledge to the campaign and will be used towards the construction of the new facility.

This two acre plot gives the Beacon House and the hospital a chance to collaborate like never before.

“We’ve got two major reasons to celebrate today, one of those is we now are going to be fully partnered with the Beacon House like we haven’t been previously. They are going to be on our new hospital campus which we’re very excited about. Secondly, this is a big jump start to the fundraising campaign to construct the Beacon House,” said UP Health System Marquette CEO, Brian Sinotte.

Having the Beacon House closer to the hospital will greatly benefit the families who are already facing a difficult time in their lives. Additional fundraisers are expected to be underway now that the official piece of land has been claimed.

“Everybody was waiting for that and until it was real for them, we didn’t feel it was really respectful to go after them with a hard ask. Now, everybody be warned, we will be calling and asking you out to lunch,” said Beacon House CEO, Mary Dowling.

Sinotte agreed to lease the land for $1 per year. The estimated cost that the Beacon House will need to raise in the next two years is between $4 and $6 million.

Critical need for blood donors across the Upper Peninsula