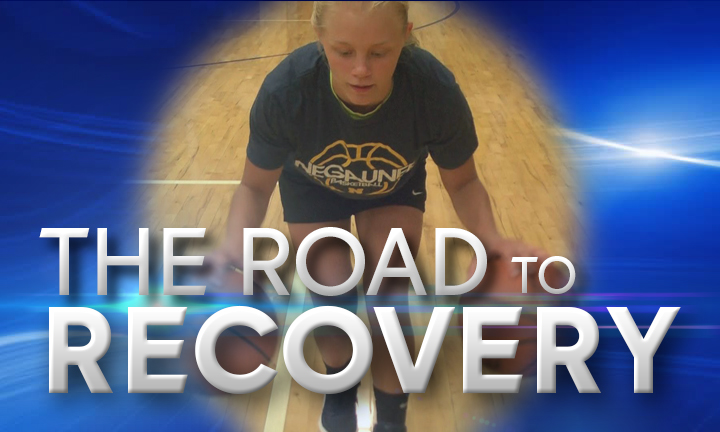 NEGAUNEE — This past season, Aleda Johnson was well on her way to another successful season at Negaunee High School. That all changed on January 31st in a game at Gladstone.

“As soon as I hit the floor, I kind of knew in my mind that my season was over. I’ve never felt anything. I kind of felt something tear and I just hobbled to the bench,” Johnson said.

“She said she felt it deep inside of her knee. I was trying to hope that that wasn’t the case. But in the back of my mind, I kind of thought it was,” Negaunee head coach Brandon Sager said.

“That night, it was less painful and just more emotional because of the fact that I wasn’t positive that my season was over, but I had a pretty good idea that it was,” said Johnson.

Johnson would be diagnosed with a torn ACL and her senior season with the Miners was over.

“When you put that much time into a sport and that much heart and pride, it’s a heartbreak. It’s hard. It’s not the worst thing that could ever happen to you, but it’s definitely hard. It’s one of the hardest things I’ve ever gone through, but I’m only 18 so it’s probably not going to be the end of trials. It was definitely a hard time,” Johnson said.

“It’s very common. We’ve tried to do a lot of things to prevent it. That was just a freak situation for her. I don’t think there was anything preventative that could have been done to avoid it,” said Sager.

So Johnson would have her surgery at Marquette General Hospital, then she was on crutches for several weeks, but it didn’t stop her from being on the sidelines for several games, including the district championship win for the Miners.

“The big thing that she did was still contribute to our team. She was a great leader. She pulled the young girls that we had to shift up in her absence and really help them along, pull them aside a lot in the locker room before games or during games,” said Sager.

Now just over four months later, Johnson is back in the gym, looking to get back into shape.

“The beginning of therapy was just getting mobility back, and once I had some mobility, they started strengthening. Now I have full mobility and my strength is getting there. It’s almost caught up to my other leg. It’s going to be about three more months. It’s the lateral movements that really take time,” said Johnson.

And her hard work caught the eye of Northern Michigan women’s basketball coach Troy Mattson, who offered her a spot on the team as a preferred walk–on. She hopes that her story will be an inspiration for other athletes who run into tough times in their high school careers.

“Her persistence and her love of the game, many people have said to me and have said to her, you have to continue to try to play basketball, just for what you meant to the sport,” Sager said.

“I guess for me, I wasn’t sure if I was even going to get an opportunity. And now that I am, things kind of happen the way that they are supposed to. Just believe in yourself and work hard. If you’re passionate about something, then just give it your all,” said Johnson.