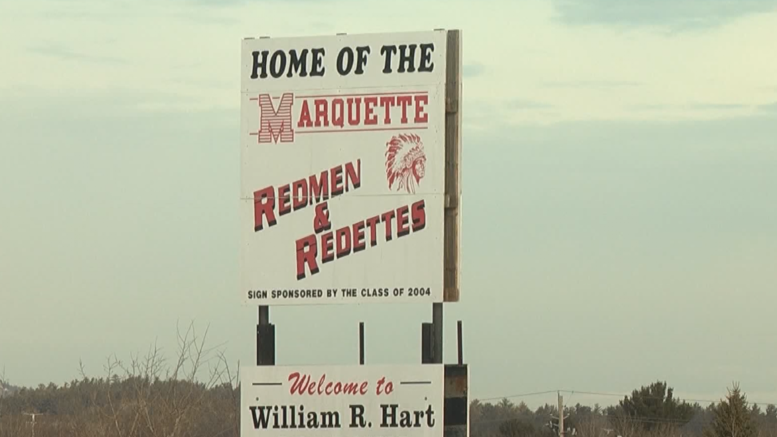 MARQUETTE — While they are a sense of identity and home pride for some students, for others they are remarkably offensive and in poor taste.

“Groups of people do care how they are depicted and it does impact our relationships between people in our society,” said Associate Professor of Native American Studies at Northern Michigan University, Dr. Martin Reinhardt.

From the Gladstone Braves and Escanaba Eskymos to the Newberry Indians and the Marquette Redmen, the U.P. has a cluster of controversial mascots that have been a topic of discussion for years.

“During homecoming, we always have students that without knowing any better, come into the school dressed up like an Indian and we also have students making their own t-shirts with the Indian head on it. A lot of the native students that I work with, don’t want to participate in homecoming because of their traditions and how offensive it is,” said Coordinator of the Native American Education Program at Marquette Area Public Schools, Tanya Sprowl.

Although distaste has been directed towards these mascots, little change has been made among the schools to veer away from the controversial names. This is in exception to Marquette Senior High School, which has worked to phase out the previous logo while maintaining the original name.

“In the late 1990’s, there was a lot of discussion about logos and the board had actually reversed and eliminated the logo, the community up roared and then that logo was re-instated. What we have done, as a board over a number of years, is slowly phase that out,” said Marquette Area Public Schools Board of Education President, Rich Rossway.

The mascot name itself continues to be a heated debate.

“It’s an area of pride, you want to have good memories with the people you hung out with for sometimes years of your life, so I get it. They want to be proud of it, but just because you are proud of the relationships you had, doesn’t necessarily mean it’s rooted in the best circumstances,” said Reinhardt.

Board members from Marquette Area Public Schools have collaborated with local tribes to ensure the mascot is represented appropriately. Other measures, such as teaching further lessons in Native American history are also set to become part of the curriculum for all students.

“What we’ve been trying to do and been getting some success with, is working with tribes and communicating with them on their desires and their needs. We’re all on the same page and this is the wonderful part. We are collaborating, we are trying to develop partnerships and we’re trying to integrate cultural education into our classrooms,” said Rossway.

Despite working with members of local tribes, according to Dr. Reinhardt, that doesn’t mean that the entire community agrees with the decision.

Although further education on the issue is stressed by multiple schools, students still participate in culturally insensitive activities such as a sign recently created by Wakefield High School cheerleaders claiming their rivals will be leaving the game on the ‘trail of tears.’ Having an image or logo such as this, can leave an impact on the students.

Moving forward and heading down a road with innocuous mascots could be in the near future through education.

“Well I think the more we as individuals say, we’re not going to tolerate this, that’s one way and we keep going down that road. I think the media plays a big role in the perpetuation of these stereotypes and I think if we had the newscasters say that, ‘we decided to not show these images, we are not going to use nicknames, and that is just our policy going forward,’I think that would go a long way in sending a message out to other communities but especially our community, we’re not going to tolerate it,” said Reinhardt.

A recent bill introduced in Massachusetts suggests the banning of any Native American mascot, whether it’s a name, symbol, or image in public schools. This bill also gives specific examples which include; Redmen, Braves, and Indians.

“Whatever we do for the next steps in the future, it will be a collaborative partnership with the tribes and the schools, and hopefully for many schools who have native imagery of some sort,” said Rossway.

What do you think about the mascot names? Should they be banned from public schools in Michigan? Head to our Facebook Page by clicking here to take a survey and let us know.