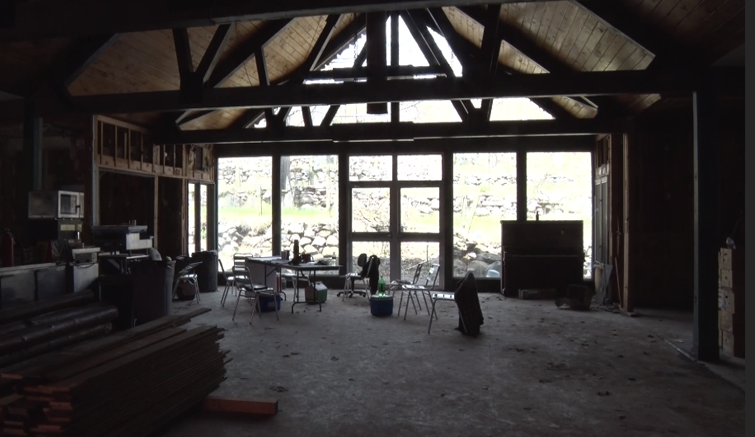 MARQUETTE — What was once known as the Northwood Supper Club is currently being transformed into a new business that withholds a unique niche. What’s brewing in the legendary building.

The ground has been broken and the demolition has begun.

“We had a lot of renovations to the building in the past and a lot of things are being revealed as we do the demolition. We are figuring out some of the important details at the moment,” said Barrel and Beam Founder/Brewer, Nick VanCourt.

What was formally known by local residents as the Northwood Supper Club is being transformed into Barrel and Beam Brewery.

“We’re trying to keep as much as what was here, still here. In some cases, it is impossible because things need to be replaced. Walls were starting to lean and the original cabin in the front, unfortunately the ceiling height was at six foot three inches and the big belly in the middle of the building, were indications that some things needed to come down,” said Founder/Brewer of Barrel and Beam, Nick VanCourt.

The memorable tiles will still be in place along with much of the original wood that gave the establishment a cabin like feel. Although the main cabin had to come down, there are plans to honor the building in a nostalgic way.

“There will be plenty elements of the former business,” said VanCourt.

This establishment will not be like the typical breweries that are sprouting up around the country, but something to capture unique tastes.

“We are going to have a very niche focus. I am very passionate about farmhouse and barrel aged ale so the family of beers that fall in the genre of farmhouse ale, is stuff that started in France and Belgium but has had a strong tradition since,” said VanCourt.

The focus will not primarily be on an active bar scene, but rather open a couple days a week as a tasting room.

A full line of beers made only of Michigan ingredients will also be offered.
Although construction just began, the VanCourt is eager to hear the public’s reaction to the renovated building.
“I’m looking forward to taking these beer ideas to full scale and getting the reaction from the public to the renovations and the beautiful building that we’re going to have here,” said VanCourt.

Renovations are set to be completed by the end of September. This is the first step in getting the business officially open, acquiring the appropriate licenses and equipment installation is also on the list.

Women in Entrepreneurship: A Panel Discussion to take place at Barrel + Beam on Thursday