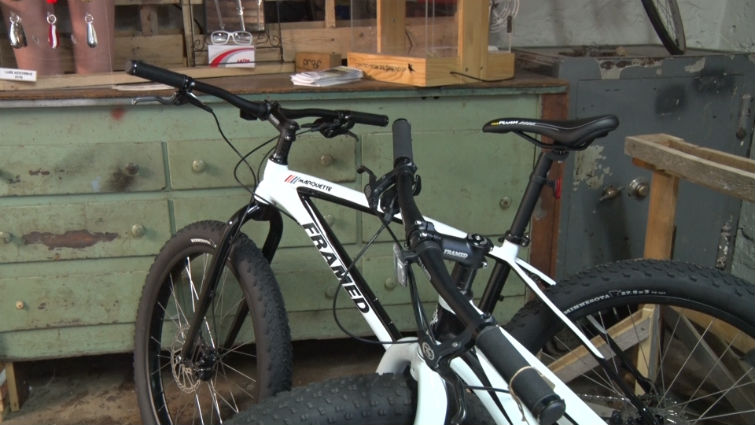 MARQUETTE — Come better weather, bikers will hit the trails around the city of Marquette and some of them will have a bike to celebrate the trails they’re on.

“Marquette Bikes are a midsized fat tire bike, so it’s a three–inch tire compared to your regular fat tire which is a four–inch tire,” Zech McCarthy, Led Shop Mechanic for The Flying Moose in Marquette. “They come in a hard tail format so it’s suspension up front and a ridge frame in the rear.”

A Minnesota based bike company called ‘Framed’ now makes a bike called the Marquette which is intended for riding trails. McCarthy said, “There aimed at more cross county trail riding but really versatile for all types of riding.”

A reason why the bike was named Marquette McCarthy said was to honor the trails we have in the area. “I think Marquette just has such a reputation for great biking and awesome trails it was an honorable mention,” said McCarthy.

Marquette offered a great variety of trails close together that riders can experience. “You can go and hit a downhill trail and a cross–country trail within 5 minutes of each other or, you know, on the same mountain basically, as well just the variety of terrain.” McCarthy said. “You can be on one side of town, get a lot more like rocky woody stuff go to the other side of town and get more like sandy kind of flowy, you know mellow riding.”

McCarthy hopes having a bike named after the city should help to put it more on the map. “I mean it helps put that image of Marquette out there a little bit more, a little advertising people are going to see that around the country and, you know, think what is Marquette, like let’s go check that out.”

New pastorate and a new career