“The endorsement from the Carpenters & Millwrights Union is a tremendous honor for me,” said Ferguson. “ The construction industry and union workers have been a huge part of my life. Growing up, my dad frequently took me to his job sites to see the work being done and talk with the crew. I learned about the importance of unions and the industry overall on a first-hand basis, and this makes earning an endorsement from the Carpenters & Millwrights incredibly impactful. I was proud to work alongside my brothers in sisters in the field as a union carpenter, and I will proudly fight for them in Washington.”

Ferguson is currently running in the democratic primary for Michigan’s 1st Congressional district, which includes the entire Upper Peninsula and 16 counties in the northern Lower Peninsula. Ferguson will be running against Linda O’Dell of Petosky in the primary on August 4th.

Read the letter of endorsement from the MRCC below: 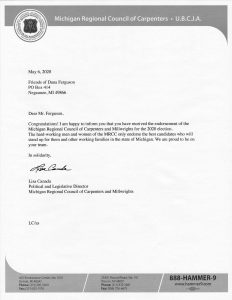