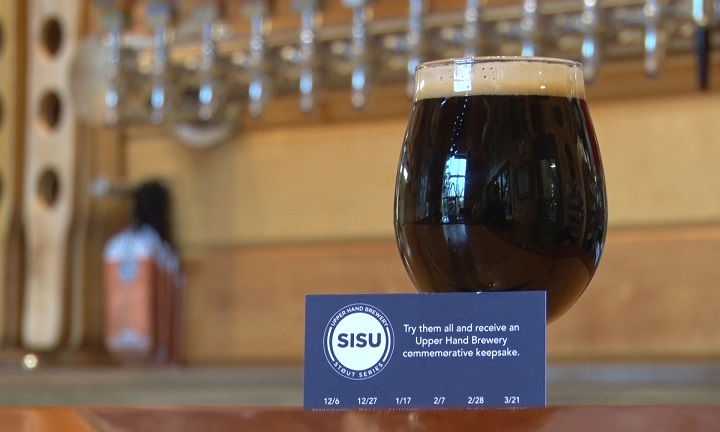 ESCANABA — The Upper Hand Brewery is releasing a series of limited edition SISU Stout variations that reflect back onto the Finnish heritage here in the Upper Peninsula.

The first release happened yesterday and it’s got a breakfast feel to it.

“This release is still on tap today,” said Production Manager at Upper Hand Brewery, Sam Reese. “It was inspired by Pannukakku, and if anyone has a Finnish grandmother in the area probably would recognize it. Pannukakku is sort of a risen Dutch pancake type thing. So we put in some of those pancake type flavors with U.P. source maple syrup and vanilla beans to kind of give it that breakfast pasty sort of character. It came across really nice.”

The Upper Hand Brewery working on multiple variations of their current SISU Stout and it will be coming out, every 3 weeks.

“Every three weeks there after we will release a new variation inspired by another part of Finnish cuisine,” added Reese. “We are going to make it in super small quantities. Usually just a keg at a time and so that is about 15 gallons. It may last for 2-3 days or maybe not even that and then it will be gone forever, until the new one comes around.”

Now as brewing goes, beer might have very few ingredients or many depending on that taste that you go for. The Upper Hand Brewery is working with some familiar ingredients but is diving into some new exotic ones.

“So some of it is new to us and some of it is classic imperial stout barrel aged beer character,” explained Reese. “Chocolate coca nibs are very popular and things like maple syrup we have also dabbled around with here. So there is a bit familiar and a bit that is un-familiar. Ultimately these big giant stout type beers do very well on their own in a barrel. They hold up to that age like a good whiskey does, but they also tend to serve really well as a template for other flavors.”

Now to keep the rest of this U.P. Winter interesting the Brewery is handing out punch cards so people can keep track and look forward to the next release.

“So we have punch cards to kind of track whether you have come in and tried it,” added Reese. “You don’t even need to come in and buy it. You can just come on in and say ‘hey can I try a sample of the Lakka SISU Stout’ and we will happy to pour you one for free.”

Now if anyone gets their card completely filled they will be receiving a special gift at the end of the last beer release.

“If you do all of them then you can commemorate at the end,” added Reese. “We are going to hand out these SISU stout, emblazoned stout glasses, which are these little stem less wine glasses.”

Celebrating beer in the Copper Country