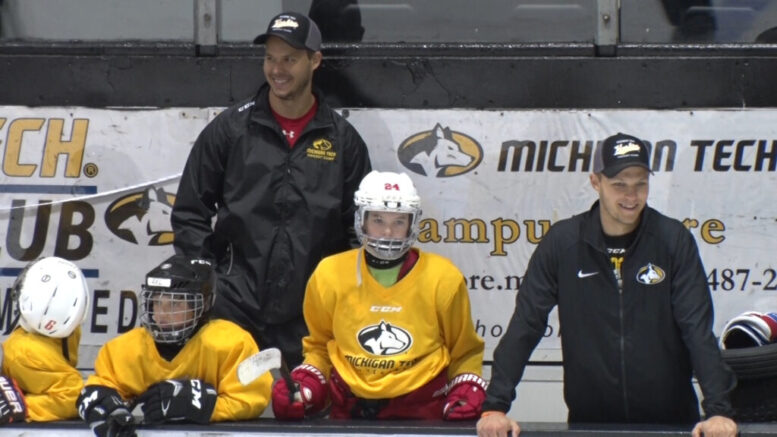 HOUGHTON — It’s every young hockey player’s dream to make it to the National Hockey League. For the ones that work hard, all the pieces can fall together. Michigan Tech’s Tanner Kero has realized that dream and, despite a unique and busy offseason, finds the time to come back to where it all began.

During his offseason, Kero comes back to his Alma Mater.  After a few weeks relaxing in Arizona, Kero spends time training for the upcoming season, in addition to mentoring younger players, who aspire to be in his position.

“Usually I try to get on the ice a couple of days a week, help out with the power skating or the skills session, then try to hop on the bench for the scrimmages on Friday,” Kero said.

He thrived playing for the Huskies, racking up points and awards. But MacInnes Student Ice Arena isn’t only a place where he could perform. For the Hancock Native, it’s also a slice of home.

“It’s such a small, tight–knit community,” he said, “and it’s fun to get away from the big city life a little bit and relax, and to be able to come back to Tech and workout and train, it brings back some memories of being here, and I’m fortunate for that opportunity.”

Tanner  was once in the campers’ skates, so it’s easy for him to relate to them.

“As a kid I grew up in this area, I went to this hockey camp for many years growing up, so for them to know that you can come from a smaller town and go through these hockey camps, you can put your mind to it and work hard,” Kero said. “If you’re determined enough and you want to put in the work, you’re able to make it to where you want to go.”

Tanner is the first of his brothers to play hockey at the professional level. Brothers Devin and Hunter are playing college hockey as well. Devin is the goalie for the Huskies, and Hunter skates on Finlandia’s squad.

“It’s what we wanted to do when we grew up, so to see my younger brothers pursuing their hockey dreams at the same time, it’s pretty awesome,” Kero said.

That dream, if realized, won’t always be smooth. His offseason will have a bit more of a different feel to it. In late June, Tanner was traded from Chicago to the Vancouver Canucks.

“It’s going to be exciting. They’re going to have a few more younger guys coming in, so I’m hoping to get the chance early, and earn a spot and stick with them throughout the season.”

Going from a team that until recently was a perennial contender for the Stanley Cup to one who has a long road ahead will be a unique experience, but one with a wide open net of opportunity.

“To be coming up with a few of the younger guys is going to be exciting, and we hope we can get it started in the right direction,” Kero said.

Tanner will worry about where he will fit into the lineup come training camp in September, but for now, he’s focused on rekindling old relationships and coaching the NHLers of the future.

Huskies take down Michigan in Houghton