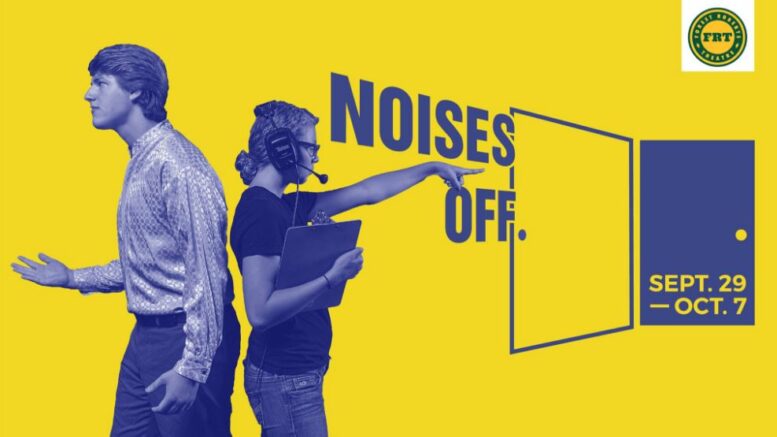 MARQUETTE–The work of an actor is a constant and on-going process. Developing a character and learning lines and movement takes time. The cast of the Forest Roberts Theatre’s production of Noises Off has managed to build a high quality show in just a little over a month of rehearsal time.

“Noises Off is often dubbed the funniest show ever written,” said performer Jill Vermeulen. “It’s about actors working on a flop and it follows them on the run of the show, as relationships dwindle and fall apart, Act II the set flips around, you see things from backstage, then it flips back around to the front and you just see this chaotic mess of a show. It’s just a really good time.”

Noises Off is a farce, meaning the humor is purposely over the top, and clear to the audience. The play is comprised of three acts, each being ridiculously hilarious.

“Farce is over the top comedy, it’s very slap-stick, very matter of fact comedy, so very obvious,” said senior capstone performer Lily Howder. “But, over the top, large, physical movements and jokes that have been pointed out, and it’s hilarious – it’s just funny. It’s like the three stooges, I would say.”

A few students are performing in Noises Off for their senior capstone project, in which extra time is spent on character work, and the process behind the production as a whole. Under the guidance, of director Paul Truckey, students have the opportunity to showcase what they’ve learned over the course of their time with the theatre.

“It’s been really great getting to work with Paul on this capstone, and all the crew has been amazing,” said Howder. “I’m learning a lot, researching a lot, and journaling every night – all that kind of stuff. I just want to add that I hope everyone comes, gets their tickets for opening night party, all that stuff.”

Noises Off opens Friday night at 7:30pm, with Saturday featuring matinee and evening performances. Next week, shows start on Thursday, and continue until Saturday.

From the sound and light designers, to the crew, to the actors themselves, putting on a show can be a lot of work, but the cast and crew of Noises Off is excited to share with you what they’ve done.

Tickets can be purchased here.