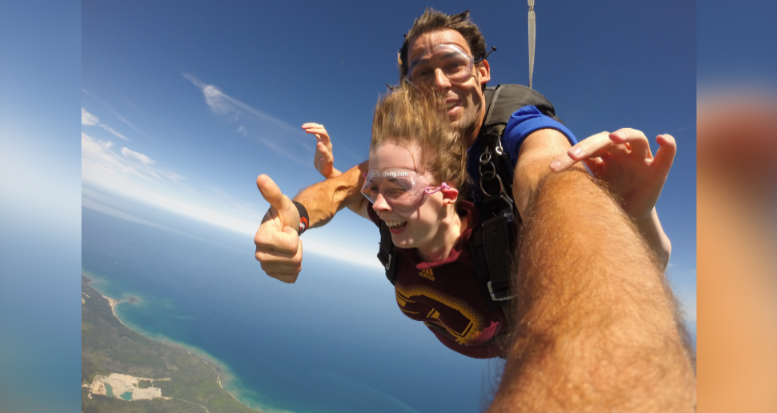 CHARLEVOIX — An organization will be coming up to the U.P. this weekend to give brave souls a once in a lifetime opportunity. In this week’s ABC 10 Feature, Melanie Palmer took the jump and lived to tell the tale of her experience.

10,000 feet, free falling at 120 mph. To any average individual, the thought of skydiving can be daunting and even terrifying but for officials with Skydive Harbor Springs, it’s just another day in the office.

“My first skydive was in 2008 with Luther, he’s the one that got me into it and then I started flying the airplane,” said Chief Pilot, Ryan Seelye.

Owner, Luther Kurtz has skydived thousands of times and now enjoys sharing the experience with new jumpers. “We’re never going to have the same rush that we had the first time we jumped, but you’re going to have it so we can give you that experience and we get some of that excitement from the people we take,” said Kurtz.

Before taking the jump, a quick lesson is taught on how to position your body during the free fall, the landing, and how to fly the parachute. Required paperwork is filled out, which can be slightly intimidating.

“We have you fill-out some paperwork, which can be the scary part,” said Kurtz.

While getting ready to jump, those unsettling nerves are apparently a good sign. “The people that are nervous, they usually do a good job because they listen to what they are supposed to do,” said Kurtz.

After learning the basics, I hopped on the plane that would soon determine my fate and took the tandem jump. The fall lasted around 7 minutes, with 40 of those seconds being a complete free fall. Saying the view was breathtaking would be an understatement.

And before I knew it, my feet were back on the ground. Although the idea can be crazy, I highly recommend it to anyone of any age.

Skydive Harbor Springs will be in Marquette on August 5th and 6th, anyone wanting to skydive themselves can call to reserve a spot at (231) 242-8822.

If you don’t get the chance to skydive when the organization is in the U.P., Charlevoix doesn’t disappoint.

“In Charlevoix here, you can see Grand Traverse Bay, Beaver Island, Wisconsin, the Mackinac Bridge, it’s unbelievable. There’s three lakes in Charlevoix, Lake Michigan, Round Lake, and Lake Charlevoix but you can see much further than that,” said Kurtz.

What sport should Sam do next for #SamVsSports?

From Pups to Pros – The Making of a U.P. sled dog #ABC10Feature