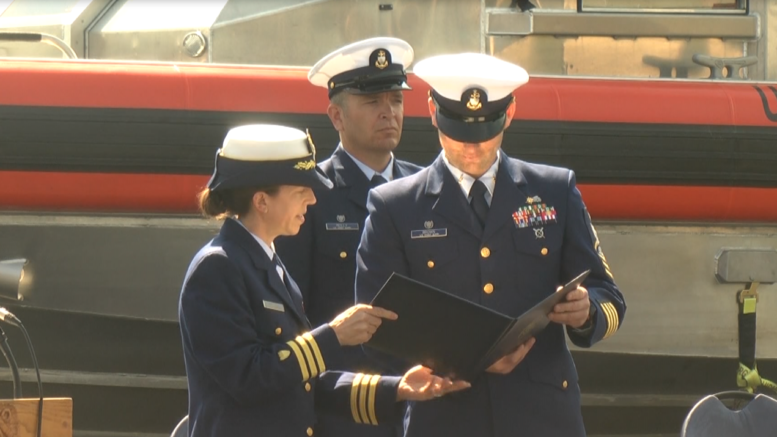 MARQUETTE — The U.S. Coast Guard’s traditional Changing of the Command Ceremony was held today to honor the former Officer in Charge and welcome the new Officer to the Marquette unit.

Patrick Brown was the Former Officer in Charge who will be passing the baton over to Chief Mark Reilly. This is Reilly’s first time ever serving on the Great Lakes and came to Marquette from Alaska. One of Brown’s priorities while being in charge was maintaining strong partnerships with local law enforcement.

Other than the relationships he has formed during his time at the unit, he will also miss the area.

“It’s definitely an emotional moment, leaving a place where the community is fantastic. I’ve made a lot of good friends here, not just partnerships in the community, as far as law enforcement, fire department, search and rescue, and all the other partners,” said Former Officer in Charge of U.S. Coast Guard Marquette, Patrick Brown.

Reilly, who is a third generation Coast Guard member, already has plans to maintain these partnerships while getting acclimated in his first month.

“I’m definitely going to be getting underway on the boats and doing a lot of training with the crew. Also meeting a lot of the government agencies around here, I know I’ve met a few of them but between Park Services, the local police department, and the fire department. That’ll be another main thing I’ll be doing in the first month, I would say,” said U.S. Coast Guard Marquette Officer in Charge, Chief Mark Reilly.

Reilly has only lived in Marquette for a week now but already loves the people and the restaurants in town.

Coast Guard ready for rescues no matter the season