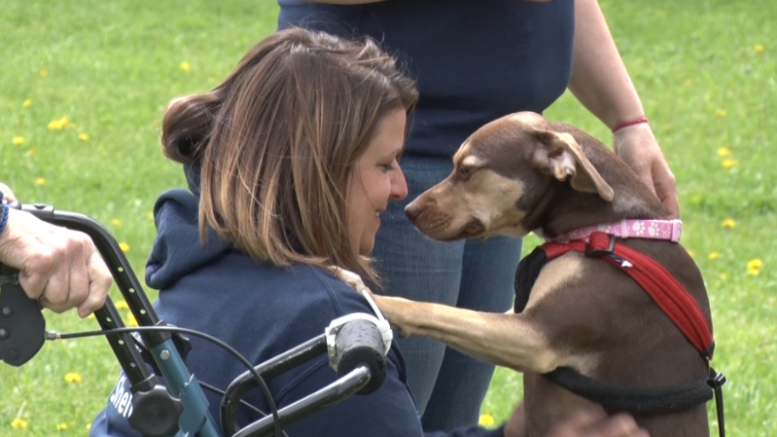 RAPID RIVER — One dog that has recently been praised for saving the life a three-year old child is being recognized by the state of Michigan.

The face of Peanut the dog has recently been seen all across the country. Peanut is now better known as a hero for saving the life of a 3-year-old child.

“Peanut was of course home, running around and she was running around upstairs but she’s a puppy so I just thought she was playing. Pretty soon, she was downstairs jumping on me so I figured she wanted outside and had to go potty. As I went outside to go hook her up, she darted as far as she could go to the end of the yard and pointed at something in the field behind the house. I started hearing noises so I went and investigated and that’s where I found the little girl,” said Peanut’s Owner, Kyle Frisk.

This girl was later identified and it was found that the residence she lived in was not suitable for her and her sister. “I did notice that she was non-verbal and extremely unkempt and not taken care of,” said Kyle’s Mother, Linda Frisk.

The irony behind the relationship between Peanut and the young girl runs deep. “Taken by the shelter by about six months, with broken legs, broken shoulders, broken ribs, and they nursed her back to help and we adopted her,” said Kyle Frisk.

Since adopting Peanut around six months ago, the family knows that Peanut is unlike any other dog but in fact a life saver.

“She really takes to children, she really likes them a lot,” said Kyle Frisk.

Not to mention, a dog that is worthy of some recognition from the State of Michigan.

While the family is honored to have this heroic canine in their lives, they believe it was all part of a bigger picture.

“There are just so many things when you look at it that proves that this was a plan to reveal what was going on and to help that little girl and her sister,” said Linda Frisk.

A rescue that would not have happened without the help of the Delta County Animal Shelter.

“The work that the Delta County Animal Shelter does and the Dickinson County Animal shelter, and all of them do is so wonderful. They found a wonderful home for this dog and this dog is now a contributing member to society,” said LaFave.

The Great Outdoors – Competing for a good cause