Storm restoration efforts were completed Wednesday night. All previous customer outages from Monday through Wednesday are considered back in service. If anyone is still without power, other than customers waiting for repairs to their meter equipment, they are asked to contact UPPCO at 800-562-7680.

During the storm, trees or limbs may have fallen on service lines to a customer’s home or business, possibly damaging electric service equipment such as meters and masts. For more information, you can visit http://www.uppco.com/wp-content/uploads/Restoration-Responsibility-Handout_UPPCO_web.pdf.

UPPCO is requesting anyone that sees additional power lines to contact them immediatly. UPPCO thanks customers for their patience and understanding.

UPPCO Crews worked throughout the night for the second consecutive day to restore power to its customers. Areas of Republic, Southwest Republic, Ishpeming and Ishpeming Township remain without power.

As of 5:30 p.m. Tuesday afternoon, 1,000 UPPCO customers are still without power. Affected areas include Republic, Ishpeming, Cooper Lake Road and US-41 West of Ishpeming. There are also a handful of customers in the Iron River area without power as well.

UPPCO officials expect to have service restored to most customers by late Tuesday evening, but with the additional snowstorm that blew through the area Monday night and into Tuesday morning, some may be without power Wednesday as well. UPPCO reports that over 100 employees are working hard to restore power to the affected areas.

Thankfully here at ABC 10 we have power back after the Monday night storm bringing in around 70-80 MPH winds according to the National Weather Service, but not all of Ishpeming can flip a light switch just yet.

According to UPPCO, as of this morning 2,400 customers remain without power. The majority of outages are in the Ishpeming area, and still around 1,000 outages in Republic-basin areas. Workers are working around the clock to restore poles damaged from falling trees and branches.

With all the snow gained today UPPCO wants to remind viewers lines could be hidden and always assume they are energized.

Here’s the latest on the power situation in Marquette County:

-As of 5:00 p.m., approximately 4,700 UPPCO Customers are still without power. Ishpeming was the hardest hit area by the storm. About 1,000 customers in Republic and 30 customers in Iron River.

-The Salvation Army in Ishpeming (222 E. Division) has a warming shelter open for those without heat.

-US-41 in West Ishpeming is back open after being closed for nine hours due to power lines on the roadway.

-For the latest on the UPPCO Power Outage, click here.

ISHPEMING TOWNSHIP — Local and county resources are working together to restore power in Marquette County after a powerful line of thunderstorms made their way through the area early Monday morning.

There’s no timetable as to when power will be restored in those areas.

Here’s the detour setup by the Marquette County Sheriff’s Office to maneuver around the down power lines: 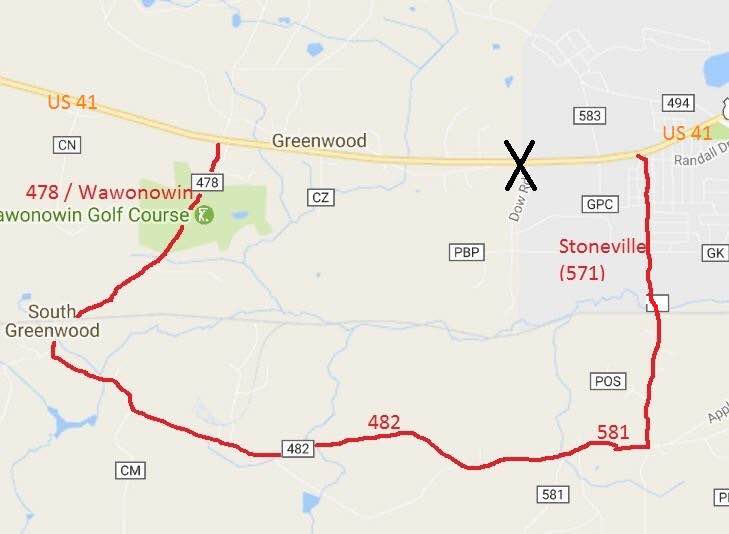 According to National Weather Service-Meteorologist Jaclyn Ritzman, the storms produced straight-line winds that reached 80mph in West Ishpeming and Republic. The storm’s winds were around 50 mph when it reached the Marquette Area.

Pea-sized hail was also reported as a result of the storm. Golf ball sized hail was reported by residents north of Negaunee. At this time, the storm did not reach tornado status according to Ritzman.