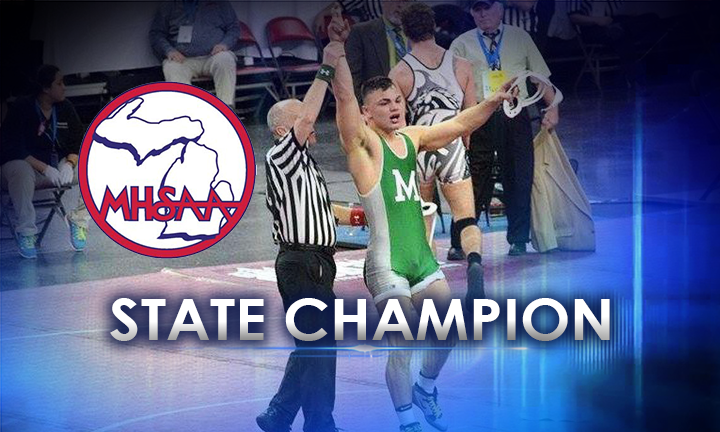 MANISTIQUE — For the past several years, the Upper Peninsula has been spoiled when it comes to high school state championships. We’ve had champions in football, basketball, hockey, and now a local wrestler brought home to the gold.

Manistique’s Tanner Gonzalez won the Division 4 state wrestling title in the 160 pound weight class at the Palace of Auburn Hills. The senior needed double–overtime to knock off Dansville’s Johnathan Stid in a thrilling finish at the end.

“When I got him down, I thought the ref had called it out of bounds so I was kind of nervous. Then I saw the two go on the board so I was excited. I just knew I had to hold him down for the last seven second of the match. Then when the final whistle blew, it was a great thing,” Gonzalez said.

Gonzalez received a hero’s welcome yesterday at Manistique High School and he was happy to see how much the community was proud of this great accomplishment.

“It’s a small town so it was great to see all these people come here. They had all the fire trucks, cop cars and ambulances there and that was sweet,” said Gonzalez.

Gonzalez became the first Emeralds to win a wrestling state title and only the third ever from the Upper Peninsula. Congrats to the man known as TKG who finished his senior year with a 49–0 record.

Five other U.P. wrestlers made it to the podium as well. In division two, Escanaba freshman Hunter Larson took 7th place in 130 pounds. Gladstone’s Adam Bruce took seventh as well in the 135 points, while his teammate Austin Demeuse placed eighth in 171 pounds. For division three, Iron Mountain’s Aaron Bolo took third place in 189 pounds. And in division fourt, Kevin Roberts of Gwinn came in fifth place in 189 pounds.