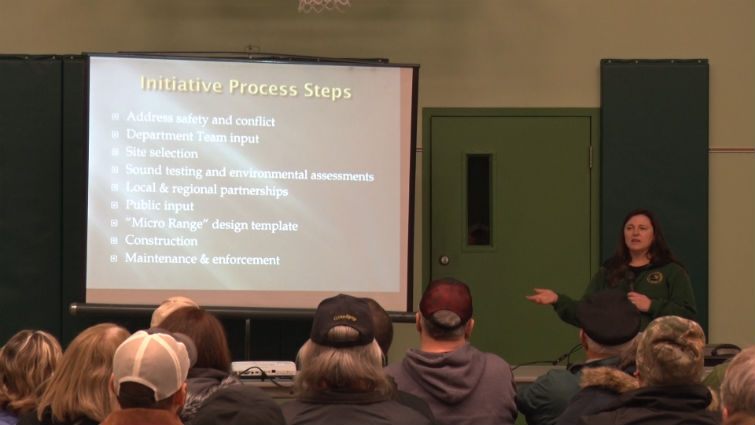 SANDS TOWNSHIP — The Upper Peninsula is in the preliminary stages of getting its first public shooting range and the Department of Natural Resources is looking for public feedback on where it should be.

The community gathered at Sands Township Hall to listen to a presentation from the DNR.

Tom Seablom, unit manager for the DNR said, “It’s a kickoff to the shooting range program that we’re going to try to develop here in Marquette County.”

The department had spent a few months looking at different place that would make for a suitable location for a public shooting range were looking for the public’s opinion on their selections. After the presentation people had a chance to voice their opinion both publicly or through writing.

Those who attended could use the map behind me to show support for a pre–designated site or even pick one of their own. Many people seemed enthusiastic about the idea of a public range but also had many questions and some concerns.

“I was excited to see all the folks that where here tonight, had a good number that turned out even with the weather that we’ve had here tonight in Marquette,” said Lori Burford, Shooting Range Analyst for the DNR. “And generally speaking, had some great suggestions on new locations that we’ll be investigating and good comments on the existing spots we’ve come up with.”

When they do decide on the best location for the range, the DNR says it will probably be about a while before they can begin construction and have no concrete timeline.

“We’re really at a year to two more years before we can get the site developed and the range developed,” Burford said.

Additionally they will not know the cost of construction until they determine a location. However that money will come from a $3 million federal grant with a $1 million match from the DNR.

The grant is part of a state–wide program intended to create new public shooting ranges and improve existing ones to give a space for shooters.

Seablom said, “It will be a spot people know that they can legally go and shoot their rifles or handguns, shotguns, potentially archery too.”