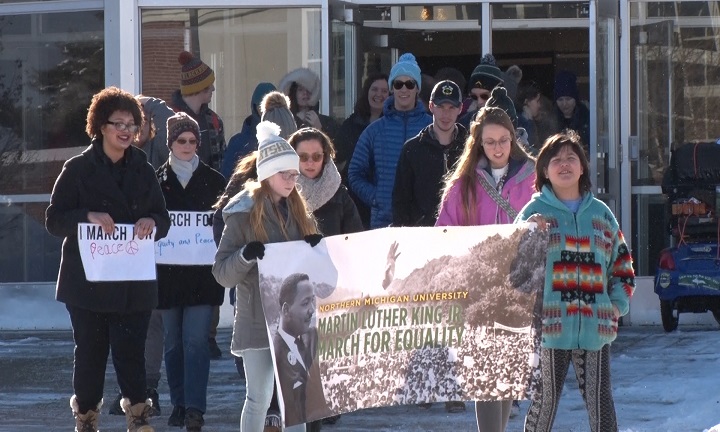 MARQUETTE — The country is observing Martin Luther King Jr. Day in remembrance of Dr. King and for what he had fought for during the Civil Rights Movement. That message was of freedom, equality, justice and love.

NMU also helped keep that memory and message alive today with an annual march held on campus. Members from the faculty, students and community came to march and stood united for the messages and beliefs Dr. King believed in. The march began at the Forest Roberts Theater and ended at NMU’s Lodge.

The Multicultural Resource Center at NMU was happy to see a big turnout for the march, and the many who came to give back to the community.

“Our students can make a huge difference,” said Shirley Brozzo, Associate Director at the NMU Multicultural Resource Center. “A lot of our faculty and staff make a difference as well. This is our home and so it is important for us to give back.”

Dr. King gained worldwide attention for organizing civil rights protests throughout the country and in 1964, at the age of 35, became the youngest recipient of the Nobel Peace Prize.

Catch the day of action

NMU students march for equality in remembrance of MLK

Kids rewarded for reading with a carnival