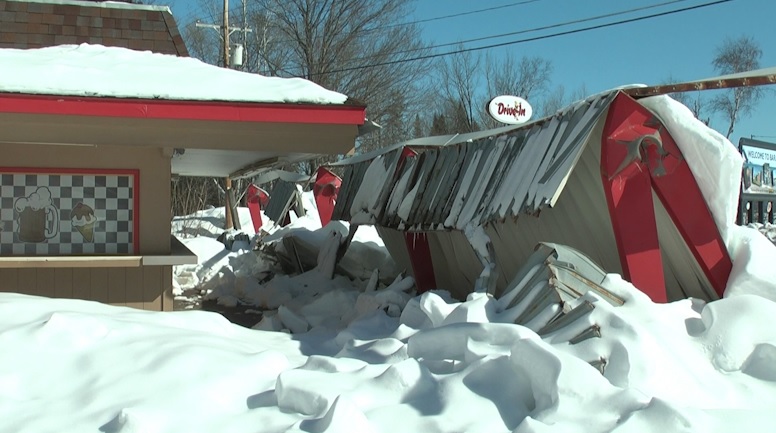 KEWEENAW PENINSULA — A warmer day in the Keweenaw brings the promise of spring with the melting snow, but not soon enough for a few buildings that were not quite able to endure the rest of the UP’s harsh wintry season.

Three commercial structures in the Copper Country were reported to have had their roofs collapse recently, more than likely causing a delayed opening for an local seasonal restaurant in Baraga, and closing a one block section of Calumet.

Melting snow has clean up crews across the Upper Peninsula busy today making room for the spring thaw, or the last few weeks of the winter season, whichever comes first.

Long time UP residents understand the maintenance that goes along with the Keweenaw winters and many have taken the opportunity to clear snow off their roofs. This time of the year usually demonstrates that Mother Nature’s persistence can easily claim the forgotten.

For tourists and locals alike in Baraga County, the smell of the grill and the smile of a carhop are welcoming signs of a Keweenaw spring, but before the restaurant can reopen for the season, it’s going to need a new awning. This past snow storm proved to be too much for the canopy, causing it to collapse. Since the restaurant is closed for the season, no one was present or injured in the incident. That is also the case in two other area roof failures.

One of which is not far from the drive in, just north of Pelkie. That building is located on the Baraga County Fairgrounds and it used for winter storage. It’s reported that nearly 20 vehicles were damaged from the collapse. Much of the rubble prevents a view into the building, but damage to RVs and boats were also visible.

Another roof in the Keweenaw that couldn’t handle anymore snow was that of the vacant retail space on Fifth St. in Calumet that was once home to Family Dollar. Although, the roof itself is not visible from the ground level, it’s reported that nearly 20 percent of the roof has caved in and more damage is possible so the block of Fifth Street has been closed for safety. Engineers are fearful that the next stage of the fall could cause the front window to shatter and injure a pedestrian. This also was a vacant building and no one was injured.

ABC 10 spoke with an area contractor who removes rooftop snow and stresses to homeowners the importance of preventing a catastrophic roof failure by removing wet heavy snow like we currently have with rising daytime temperatures. The fluctuation cases the snow to melt during the day and refreeze at night, which leads to mores structural weight problems.