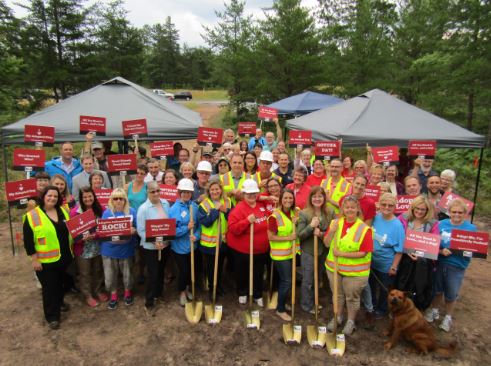 GWINN–A groundbreaking ceremony was held Wednesday evening for the Upper Peninsula Animal Welfare Shelter, as they get ready to begin phase one of construction on their new adoption center in Gwinn.

UPAWS board members invited members of the public and donors to come out, despite the rainy weather, to celebrate the fundraising process. The new shelter will integrate community programming, and create new approaches for collaboration and education in animal welfare. The current shelter in Negaunee is outgrown, and the new shelter will be 4 times the current size. The $3.7 million project will reinvent UPAWS nearly 40 years after its creation.

“We’ve focused so hard on our mission to save every savable animal, help to find them homes, and we’ve been doing that really with a 40 year old facility kind of dragging us down,” said Kori Tossava, the Executive Director of UPAWS. “So, what this is going to allow us to do is really bring animal welfare in Marquette County into the new generation.”

To date, UPAWS has raised over $2.4 million for the new facility.

Accident puts one man in hospital