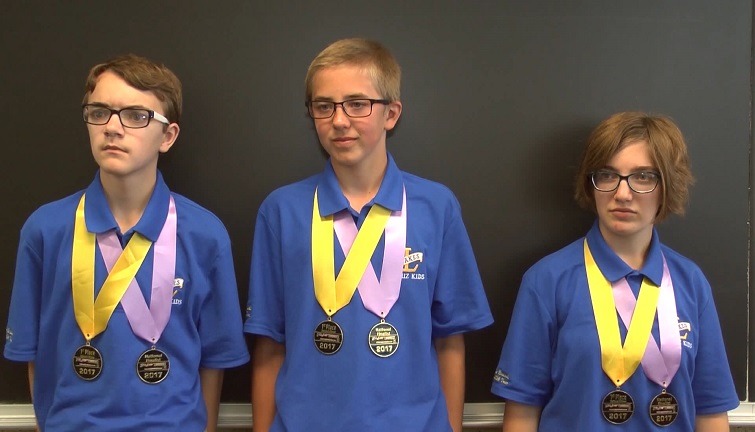 LAKE LINDEN — Three eighth grade students at Lake Linden-Hubbell Middle School not only won a national championship, but may have helped create a solution to a local issue.

At the eCybermission Competition in Washington, D.C. last week, Siona Beaudoin, Beau Hakala and Gabe Poirier won the national title in the eighth grade division. They were the only team from the Upper Peninsula out of 6,000 total across four grade levels.

“It’s hard for me to express in words of how proud I am of these students with the amount of work they put in, the diligence they had for doing this project. They worked hours and hours and hours on this,” said the students’ teacher, Nick Squires. “The local community, the school, even just the U.P. in general should be very very proud of what these students did.”

These Whiz Kids have been working with stamp sands since last year. This year, their project focused on attempting to grow different types of plants on the stamp sands.

“Our area is surrounded in stamp sand, like our football field is built on it. It’s just all around our community, so we wanted to find a cost-effective way to remediate the stamp sands,” said Whiz Kid Beau Hakala.

The trio found that alfalfa and fescue plants grew the best on stamp sands. Growing plants will not only be prettier than the village’s current solution, but cheaper.

“Currently, they’re putting 12 inches of topsoil on top of the stamp sand, and they’ve only remediated about half of it and they’ve already spent $12 million,” said Whiz Kid Sinoa Beaudoin.

The Whiz Kids presented their findings to the Lake Linden Village council and were granted permission to do the same project on a larger scale. They are currently trying to secure grant money to fund the project.

Although winning was great, that wasn’t the only benefit of completing the project.

“I think that one of the greatest parts was the realization that people like us that live in such a small area can do something bigger to benefit a lot of people,” said Whiz Kid Gabe Poirier.

Next year, the trio would like to continue their work with stamp sands while entering their last year of eligibility for the eCybermission Competition.

One month in, things going well for new restaurant