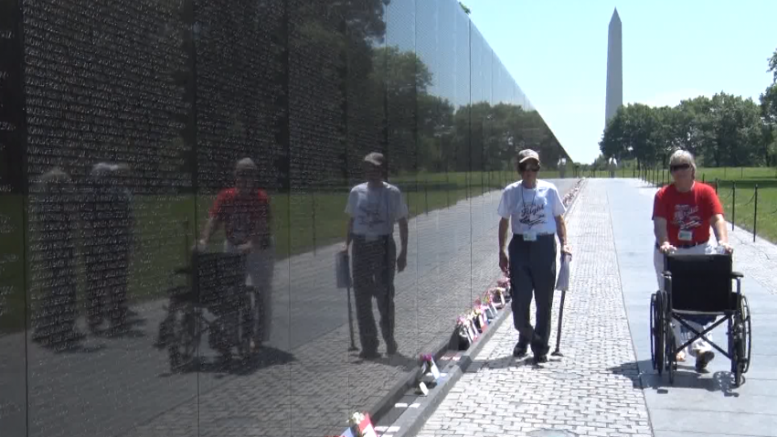 This is the very first flight that Korean War Veterans were eligible for. One veteran even shared although he was stationed in Washington D.C. back in 1954 he had no time to explore the city.

“It’s very exciting, it’s nice with the marching band, and the police that drove us here from the airport and its really cool,” guardian Greg Potvin said.

“I’ll have to remind myself of being there,” Donald Potvin said. “I was in the armed forces police there made up of army, navy, marines, sailors ext. and it was a good show.”

The morning before boarding veterans were escorted by police and sent off by community members. A warm welcome was given from fellow travelers and staff upon landing in Washington D.C. Some were even surprised by loved ones. The trip included seven different stops full of history, at the first the stop Veterans were welcomed by Jack Bergman.

Throughout the trip veterans were thanked for their service and approached by people of all ages asking for a handshake, hug, and photos. Every veteran was accompanied by a guardian, some friends, family, spouses, and even volunteers.

“We met each other last night,” guardian Shawn Wallin said.

“He lucked out and got me,” Veteran Donald Trekas said.

“I agree they are all bigger than I expected to be,” Wallin said.

The second part of the tour explored the Lincoln Memorial, Korean Veteran Memorial, and the Vietnam Memorial.

It was a beautiful day exploring Washington with a high of 98 degrees, which didn’t seem to bother the Yooper Veterans. The Air Force Memorial, Arlington Cemetery, and the Pentagon Memorial were all a part of the second half of the tour.

At the Air Force Memorial Veterans witnessed a surprise performance put on by the Air Force and the Color Guard. Veterans also witnessed the Changing of the Guards at Arlington Cemetery. Although the guards cannot verbally acknowledge the Veterans, a sign of respect is shown by dragging their toes. The last stop on the tour was the Pentagon Memorial, where a local Marquette man is honored.

“The Upper Peninsula Honor Flight brings the community together,” Coordinator Scott Knauf “The community is realizing I think how important our Veterans are and what we have today because of their service.”

Throughout the trip, they were given items such as blankets and challenge coins. But to receive the most valued prize of the day, veterans were asked what their favorite thing was while serving. In unison they responded- “Mail.” Faces filled with joy as the volunteers handed out mail written by family and friends which were all waiting in Escanaba for their return.

No Trace Traveling Trainers stop in the Keweenaw